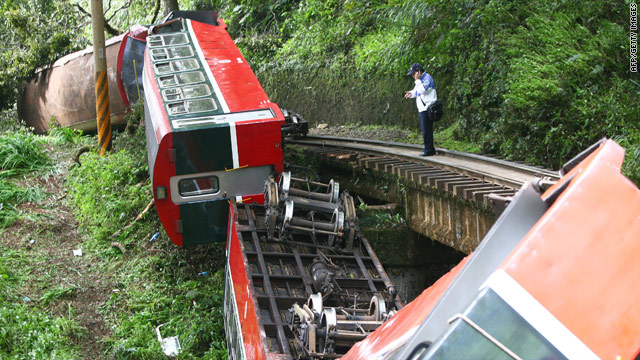 Four cars of a train were derailed when a one-ton branch struck it on Taiwan's Alishan Forest Railway this week.
April 29th, 2011
07:14 AM ET

Termites behind train wreck that killed 5

Termites are responsible for a train crash in Taiwan that killed five Chinese tourists and injured more than 100 others, government officials said in a report on the state-run Taiwan Today website.

The accident happened Wednesday, when a 40-foot-long (12.5 meter) branch weighing one ton fell from a 90-foot-tall Mori oak tree less than 10 yards from the track of the narrow-gauge Alishan Forest Railway, striking a train and derailing four cars, according to the report.

Investigators dispatched by the Forestry Bureau of the Council of Agriculture determined that termites had eaten away the interior of the large branch, and with further stress on the tree from recent dry weather, it broke and fell on the train, the report said.

"The heavy branch fell because it was decayed inside," said one of the investigators, Wang Ya-nan, a professor at National Taiwan University, according to a report on the Focus Taiwan website.

â€śThis natural phenomenon could not have been predicted or prevented,â€ť the investigators said, according to Taiwan Today.

Service on the popular scenic mountain railway has been suspended for a week, Focus Taiwan said.

A video showing wolves chasing actors across the stage during a live show in China has raised alarm about the safetâ€twitter.com/i/web/status/1â€¦Gu
cnni

9:22 pm ET June 17, 2021 RETWEET
NASA wants to return to the moon, and astronauts will need some wheels when they get there. GM has teamed up withâ€twitter.com/i/web/status/1â€¦Ea
cnni