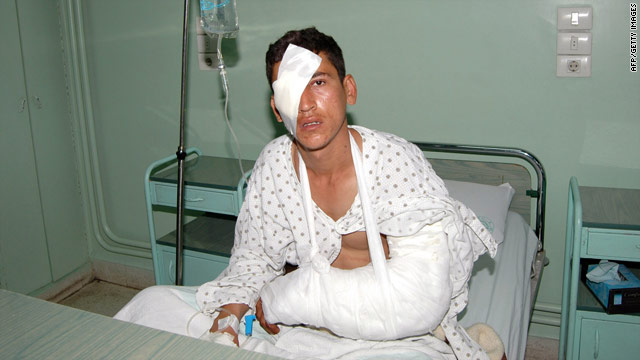 In flashpoint Syrian city, another day of shelling

[Updated at 9:19 a.m.]A few dozen tanks fired shells and a curfew was imposed Saturday in the restive Syrian city of Daraa, the site of ongoing clashes between security forces and protesters, eyewitnesses told CNN.

The assault took place in the eastern part of the embattled city, where helicopters were flying overhead and soldiers were stationed on rooftops, the witnesses said.

Gunfire could be heard in the background as one of the eyewitnesses spoke to CNN over the telephone.

One eyewitness said that men venturing outside were being shot and women and children who left their homes were being escorted back. Another witness said anyone on the street was being shot.

Bloated bodies remained uncollected in the streets, their relatives afraid to retrieve them, witnesses said, and they complained about a lack of water, power, electricity and food.

CNN has not been granted access into Syria and is unable to independently verify witness accounts.

But CNN has spoken with witnesses, some of whom have also reported what they see via social networking sites and posted homemade videos. Reports also have been compiled by human rights organizations.

The clampdown in Daraa comes a day after 19 people, including four soldiers, were reported killed and more than 50 others wounded in the city, where the country-wide demonstrations started last month.

Government forces opened fire on protesters from neighboring villages who tried to enter the city near the Jordanian-Syrian border, according to witnesses who spoke with CNN.

The violence comes amid a bloody crackdown against protesters by the Bashar al-Assad regime in Damascus.

The harsh crackdown has emboldened demonstrators and has drawn widespread criticism across the world from countries, international entities like the United Nations, and human rights groups.

The U.S. government on Friday announced new sanctions against top members and elements of the regime.

Former first lady Melania Trump is to "maintain 'Be Best,' " said one of the sources, Trump's loosely defined initiâ€twitter.com/i/web/status/1â€¦pu
cnni