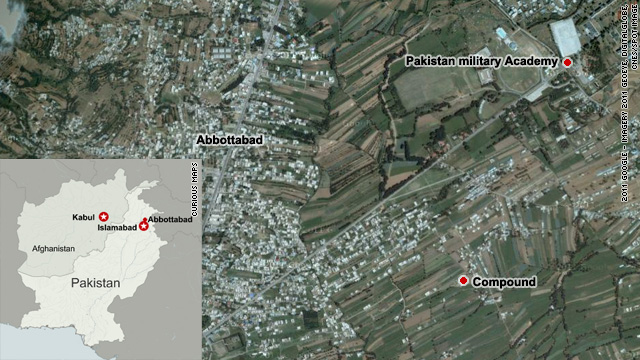 A map shows the compound and the city where Osama bin Laden was killed and its location to a Pakistan Military Academy.
May 2nd, 2011
12:35 PM ET

The compound where Osama bin Laden was killed by U.S. forces is located a bit more than 1,000 yards from a Pakistan Military Academy, raising some questions about how much information the Pakistan military may have had about his whereabouts.

U.S. Sen. Carl Levin, Senate Armed Services Committee chairman, said during a press conference that the Pakistani army has "a lot of explaining to do."

Abbottabad is home to Pakistan's equivalent of West Point - and the website of the Pakistani military even describes the PMA as "a short distance from Abbottabad" also noting "a fine straight road leads to PMA."

Levin said while he appreciated some of the remarks made by President Asif Ali Zardari, he expected that he would have talks with the military about what they knew.

"I do think that the Pakistani president's statement today was a very reassuring statement when he very specifically said that he thinks it is a great victory and that it's a success and he congratulates us on the success of the operation," he said.

But although Levin said he was "not necessarily suspicious" that Zardari or civilian leadership knew, he added, "I must tell you I hope (Zardari) ... will follow through and ask some very tough questions of his own military and his own intelligence. They have got a lot of explaining to do."

RT @Acosta: TX Gov. Abbott at Uvalde news conference on what he was told about school shooting: "I was misled... I am livid."
sarasidnerCNN

5:02 pm ET May 27, 2022 RETWEET
The Artemis I mega moon rocket is getting ready for its latest attempt at a final prelaunch test, according to an uâ€twitter.com/i/web/status/1â€¦Az
cnni

3:07 pm ET May 27, 2022 RETWEET
Elon Musk tweeted that it is "morally wrong & dumb" to use the word billionaire as a pejorative if that person is uâ€twitter.com/i/web/status/1â€¦ra
cnni

4:45 pm ET May 26, 2022 RETWEET
Iceland's glaciers are melting fast, some at a rate of over 150 meters a year. University of Iceland director Thorrâ€twitter.com/i/web/status/1â€¦2w
CNNweather

9:21 am ET May 26, 2022 RETWEET
Sandstorms threaten to wreak havoc on a region that's vital to the global economy, and experts warn that the phenomâ€twitter.com/i/web/status/1â€¦fJ
CNNweather

10:36 am ET May 25, 2022 RETWEET
Australians voted for stronger action on climate change -- but for a nation that's long built its wealth on coal anâ€twitter.com/i/web/status/1â€¦VY
CNNweather