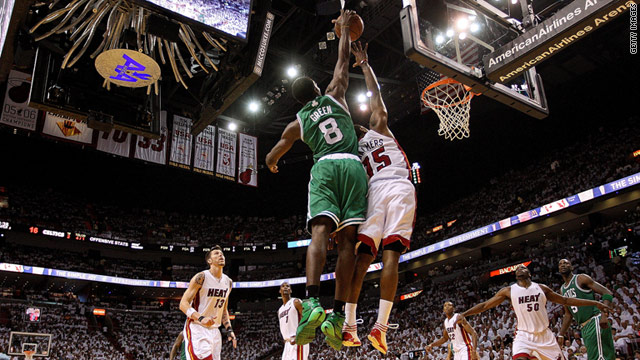 SI.com: Can Boston stand the Heat?

By the end of Sunday night's game against the Miami Heat, the Boston Celtics were left in tatters, facing a 99-90 Game 1 loss. While Boston suffered a significant blow when Paul Pierce was ejected from the game after receiving two technicals in a span of less than one minute, that was the lesser of the Celtics' problems. As SI.com's Ian Thomsen explains, the Celtics crumbled under the pressure and lacked cohesiveness, all while the Heat found its stride atop an impressive 38-point showing by Dwyane Wade.

"Wade and Jones (25 efficient points) had dumped the Celtics in a deep 87-74 hole at the time of Pierce's ensuing run-in with Wade, which makes Pierce's ejection less the cause and more a symptom of Boston's opening-game downfall," writes Thomsen. "Wade was running the baseline defensively when he bore through a Pierce screen. Referee Ed Malloy instantly called double technicals on both stars, and then pointed Pierce to the locker room."

Having lost to the Heat twice within the last month, the Celtics will enter Tuesday's Game 2 match-up with something to prove. Their lackluster performance Sunday may light the fire the team and Pierce needs to avoid rookie mistakes and charge back into this series. Or could Game 1 be just a sign of things to come?

13 - Number of consecutive games the Cleveland Indians have won at home. Their 13th victory came against the Detroit Tigers, Sunday.

3:01 pm ET October 19, 2021 RETWEET
The Pfizer/BioNTech vaccine is 93% effective in preventing hospitalization due to Covid-19 among children ages 12 tâ€twitter.com/i/web/status/1â€¦uF
cnni

2:30 pm ET October 19, 2021 RETWEET
This Indian couple had to use a cooking pot to get to the temple where their wedding was taking place, as the streeâ€twitter.com/i/web/status/1â€¦Tl
CNNweather

2:25 pm ET October 19, 2021 RETWEET
Cryptocurrency investors finally got what they've been clamoring for as the first bitcoin-linked, exchange-traded fâ€twitter.com/i/web/status/1â€¦Jx
cnni

1:45 pm ET October 19, 2021 RETWEET
Using e-cigarettes and other tobacco products to keep from relapsing to cigarettes doesn't appear to be effective,â€twitter.com/i/web/status/1â€¦hS
cnni