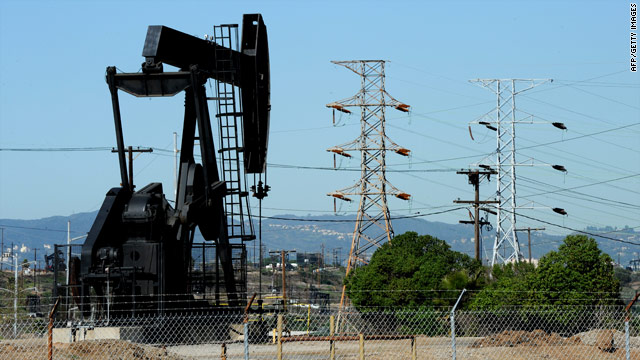 U.S. stocks struggled for a second session on Tuesday, as disappointing corporate earnings and a steep drop in the price of oil weighed on the broader market.

The Dow Jones industrial average finished mostly unchanged, rising less than a point, to close at 12,808.

The biggest drag on blue chips was Pfizer, which reported earnings per share that beat by just a penny. The drugmaker reaffirmed its outlook, but investors were hoping for more. Shares fell 3%.

Financial shares were among the top performers in the Dow, with Bank of America and JPMorgan Chase closing up more than 1.5%.

The energy sector was the biggest weight on the broader market as oil prices retreated sharply, settling down 2.2% to $111.05 a barrel. Chevron shares fell 2%, ConocoPhilips shares dropped more than 4% and Exxon Mobil was down less than 2%.

Despite higher gas prices, auto sales rose in the Untied States in April, including a larger-than expected gain for General Motors.

GM reported Tuesday that U.S. sales were up 27% last month versus a year ago, driven by strong demand for fuel-efficient passenger cars and crossovers.

Sales of the company's flagship economy car, the Chevrolet Cruze, were the best since it was launched in 2008. But GM wasn't the only one benefiting from renewed interest in fuel efficient cars. Hyundai said total U.S. sales in April were up 40% from last year. Kia Motors, which is partly owned by Hyundai, also reported record sales for the month. Ford said sales rose 16% in April, driven by sales of the Fiesta, Fusion and Focus.

Netflix CEO Reed Hastings is pleased with his company's massive growth, but he fears that getting too large will start "an Armageddon" with cable networks.

Hastings talked about Netflix's "niche" philosophy - a Goldilocks-esque business plan of staying "not too big, not too small" - in a panel discussion Tuesday at the Wired Business Conference in New York City.

Panel moderator Chris Anderson, the editor in chief of Wired magazine, asked Hastings who is "most threatened" by Netflix as it expands its streaming video content.

"We've consistently said getting into current season [TV] or newer movies would not be profitable for us," Hastings said. "It would be an Armageddon. It would be World War III, and we likely wouldn't survive that battle."

Vaccine advisers to the US Centers for Disease Control and Prevention have put off making a decision on Johnson & J‚Ätwitter.com/i/web/status/1‚Ä¶NU
cnni

7:01 pm ET April 14, 2021 RETWEET
A geophysicist who allegedly beat police officers who were trying to help injured rioters during the US Capitol sie‚Ätwitter.com/i/web/status/1‚Ä¶KL
cnni