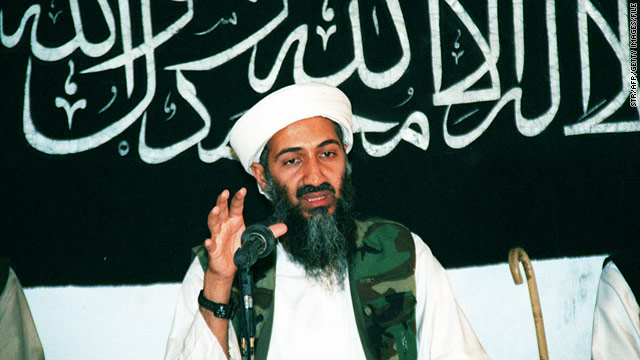 One of the dead men bears a family resemblance to bin Laden, but there was no confirmation of his identity. Besides bin Laden, an adult son of the al Qaeda leader, two al Qaeda couriers and a woman were killed in Monday's attack by U.S. commandos, according to American officials.

Reuters says the photos were taken by a Pakistani security official about an hour after U.S. forces left bin Laden's compound and that it is confident of the authenticity of the purchased images. The U.S. commandos took bin Laden's body with them, U.S. officials have said.

[Updated at 8:27 p.m. ET] Sen. Dianne Feinstein, chairwoman of the Senate Intelligence Committee, told CNN that Osama bin Laden was near some weapons when U.S. forces shot him in a compound in Abbottabad, Pakistan.

"He was right there and going to get those arms. You really can't take a chance," Feinstein told CNN's John King.

Previously, a U.S. official said bin Laden was unarmed but was making a threatening move when he was shot. When asked if bin Laden tried to grab a weapon or physically attack a commando, the official would only say, "he didn't hold up his hands and surrender."

A different U.S. official who has seen military reports of the raid said bin Laden was "moving" at the time he was initially shot. But the official declined to describe the movements more specifically, CNN's Barbara Starr reported.

[Updated at 7:51 p.m. ET] Several U.S. senators who said they saw a photograph of Osama bin Laden after he was shot now say they cannot be sure whether the photo was authentic.

These senators had described the photo to reporters and were using it to help form their opinion on whether President Barack Obama should release pictures of the dead al Qaeda leader. Fake photographs of a dead bin Laden have been circulating the Internet.

The objects were "hiding in plain sight," according to the official, who described the material as a treasure trove of information.

At a Senate Judiciary Committee hearing Wednesday, U.S. Attorney General Eric Holder said of evidence taken from the residence: "As we glean information from that material, we will make appropriate decisions with regard to who might we add to the terrorist watch list, the no fly list, all those things."

[Updated at 6:43 p.m. ET] Although the pros and cons of releasing the photos of a dead Osama Bin Laden were debated at the White House, a senior administration official says that the discussions were "not at all contentious."

The official admitted that "leaks are possible," but said that did not sway the president from reaching his decision

[Updated at 5:08 p.m. ET] Osama bin Laden was "moving" at the time he was initially shot, according to a U.S. official who has seen military reports of the Monday morning incident in Abbottabad, Pakistan. But the official declined to describe the movements more specifically, CNN's Barbara Starr reports.

Previously, another U.S. official said bin Laden was unarmed but was making a threatening move when he was shot. When asked if bin Laden tried to grab a weapon or physically attack a commando, the official would only say, "he didn't hold up his hands and surrender."

[Updated at 4:25 p.m. ET] When President Barack Obama visits New York City's "ground zero" on Thursday, he will take part in a ceremony and meet with families of September 11 victims, but he will not make remarks, White House spokesman Jay Carney said.

The site is where the twin towers of the World Trade Center once stood. The towers fell on September 11, 2001, when al Qaeda hijackers flew commercial planes into them.

"President Bush will not be in attendance on Thursday," Bush spokesman David Sherzer said. "He appreciated the invite, but has chosen in his post-presidency to remain largely out of the spotlight. He continues to celebrate with all Americans this important victory in the war on terror."

[Updated at 3:36 p.m. ET] President Barack Obama a few minutes ago praised the military mission that killed Osama bin Laden, saying "the terrorist who started this war and took so many innocent lives learned that America does not forget."

[Updated at 3:21 p.m. ET] U.S. Rep. Peter King, chairman of the House committee on homeland security, released a statement saying he understands and will not oppose President Barack Obama's decision to not release photos of a dead Osama bin Laden.

"While I have said that a photo release may be a good way to combat the predictable conspiracy theories about bin Laden's death, this is a decision for the president to make, and I respect his decision," King, R-New York, said.

If bin Laden surrendered, the team was required to accept it if that could happen safely, Carney said. He provided no additional details on what occurred inside the compound when bin Laden was killed.

There was no question that the operation was lawful, Carney told reporters, adding that "consistent with the laws of war, bin Laden's surrender would have been accepted if feasible."

"I think it's entirely appropriate given the circumstances that he was brought to justice the way he was," Carney said.

But Rep. Duncan Hunter, a Republican former Marine who serves on the House Armed Services Committee, disagreed with the decision. "As Americans we deserve to see them," he said.

Recapping what Carney said about some of the reasons: Obama was worried that graphic photos of bin Laden's body could incite violence or be used as propaganda by America's enemies, and he wanted to avoid a perception of U.S. gloating. Carney cited an interview that Obama did with CBS's "60 Minutes" earlier today when providing the reasons.

[Updated at 2:40 p.m. ET] Shortly before the White House press secretary confirmed that President Barack Obama has decided not to release photos of a dead Osama bin Laden, a senior Democratic official close to the White House told CNN that the president was "never in favor" of releasing the pictures.

Obama felt that releasing the photos was unnecessary given the fact that so few credible voices have questioned the death, and that the conspiracy theorists would never be satisfied, the official said, according to CNN's Ed Henry.

[Updated at 2:36 p.m. ET] One reason why President Barack Obama decided not to release photos of a dead Osama bin Laden is that Obama believes such graphic photos could incite violence or be used as propaganda by America's enemies, White House Press Secretary Jay Carney said, citing an interview that Obama did earlier today with CBS's "60 Minutes."

"We don't trot out this stuff as trophies," Obama told "60 Minutes," according to Carney.

Carney said the United States has conclusive proof that bin Laden has dead, citing DNA evidence, facial recognition evidence and his identification by others at the compound where he was killed. Obama, according to Carney, told "60 Minutes" that the United States has monitored worldwide reaction, and that there is no doubt even among al Qaeda members that bin Laden is dead.

"In my opinion, there's no end served by releasing a picture of someone who's been killed," Hoyer told reporters Wednesday afternoon. "I think there's absolute proof that Osama bin Laden was, in fact, the person that was taken into custody (and) was killed in the process, in the firefight. I don't think there’s any necessity to release a picture."

[Updated at 1:31 p.m. ET] The president has decided not to release photos taken by Osama bin Laden after his death, an administration official briefed by the White House told CNN.

[Updated at 1:27 p.m. ET] President Barack Obama does not plan to release photos of Osama bin Laden to prove his death, CBS News said on Twitter on Wednesday. Obama made the comment to "60 Minutes," the network said.

[Updated at 11:28 a.m. ET] Osama bin Laden had 500 Euros (about $745) in cash and two telephone numbers sewn into his clothing when he was killed, a congressional source present at a classified briefing on the operation Tuesday told CNN Wednesday.

[Updated at 11:16 a.m. ET] One of Osama bin Laden's daughters has told Pakistani interrogators that she saw her father be shot and killed by U.S. forces, a senior Pakistani intelligence source said Wednesday.

The daughter, believed to be 12 or 13 years old, was among those left behind at the compound after Monday's U.S. raid, the source said.

[Posted at 10:34 a.m. ET] Some people left at the compound after the killing of Osama bin Laden are in Pakistani custody and are being interrogated,  a senior Pakistani intelligence source said Wednesday.

There were eight or nine children left behind, including a daughter of bin Laden who has told Pakistani interrogators that she saw her father be shot, the official said.