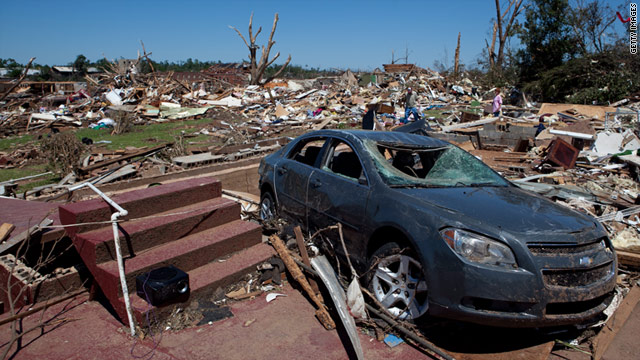 At least 178 tornadoes were part of the severe weather that raked 14 states April 27-28, making it the largest tornado outbreak in U.S. history, the National Weather Service said Wednesday.

The number of twisters surpassed the previous record of 148 tornadoes April 3-4, 1974, the Weather Service said.

People living in tornado-afflicted areas of the South are still sharing stories of personal loss and images of destroyed homes, fallen trees, and demolished neighborhoods with CNN iReport. Their stories dot the South in a map and timeline, as shown in CNN iReport’s Open Story, a collaborative method of telling the story of an event.

Josh Spurgin sat on the steps of his home in Higdon, Alabama, which sat in shambles a day after a tornado destroyed it. The 23-year-old lost almost everything. Many homes in his neighborhood are gone and some of his neighbors died in the tornado. Besides the support of his family and friends, he’s turned to humor for a bit of relief in this otherwise dark situation. He joked with funnyman Michael Ian Black and "Funny or Die" comedian Brian Lynch when they responded to his tweets about the storms.

When the town of Ringgold, Georgia, reopened its streets for a brief afternoon on May 1, resident Gail Murphy was blown away by the devastation. The mass destruction had happened just 6 miles from her home.

"The downtown area is very badly damaged along with the schools and lots of other homes and businesses. This has been unbelievable to witness with my own eyes and I thought I had pretty much seen it all," she said.

Do you live in the region and are you trying to move forward after the tornados? Share your story with CNN iReport.