The FAA has issued a ground stop for three airports in the Carolinas for a ‚Äúnational security effort,‚ÄĚ as a suspetwitter.com/i/web/status/1‚Ä¶SVqtu9 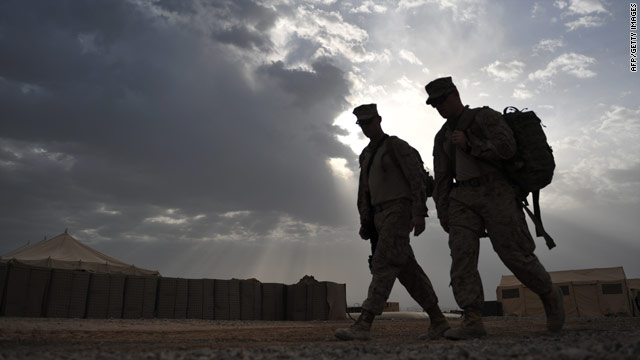 And with the big man at the top out of the picture, Time magazine's¬†Mark Thompson writes, "pressure will increase to speed up the withdrawal of some of the 100,000 U.S. troops now in Afghanistan."

"The war in Afghanistan was never solely about killing or capturing bin Laden. The United States sought to overthrow the Taliban because it had allowed bin Laden to operate inside Afghanistan,"¬†Nora Bensahel, deputy director of studies and a senior fellow at the Center for a New American Security in Washington, wrote in an opinion piece for CNN.

"Even those who recently supported the war may now believe that the war‚Äôs main goals have been achieved and it is time for U.S. forces to come home," Bensahel wrote. "Obama will face an uphill battle convincing Americans ‚Äď and some members of Congress ‚Äď that U.S. strategic interests still require spending billions of dollars a month on military operations in Afghanistan."

Secretary of State Hillary Clinton said the death was a warning that the Taliban cannot hide, but she hopes his death can mark a road to peace for those who want it.¬†

A U.S. senior official who deals with policies in Afghanistan told the Washington Post the death changes things because it ‚Äúpresents an opportunity for reconciliation that didn‚Äôt exist before.‚ÄĚ¬† The hope, as Clinton hinted, is that somehow the death can be leveraged into peace talks.

"Administration officials think it could now be easier for the reclusive leader of the largest Taliban faction, Mohammad Omar, to break his group‚Äôs alliance with al Qaeda, a key U.S. requirement for any peace deal," the Washington Post writes. "They also think that bin Laden‚Äôs death could make peace talks a more palatable outcome for Americans and insulate President Obama from criticism that his administration would be negotiating with terrorists."

For U.S. Rep. Jason Chaffetz, R-Utah,¬†the answer is simple: It's time to pull out of Afghanistan now.

For some, like the father of the first U.S. victim of¬†the war in Afghanistan, the death was a day of "victory," perhaps a sign that his son did not die in vain.

But for those still on the front lines,¬†there are many questions.

The New York Times writes that the raid itself has "called into question many of the administration‚Äôs basic assumptions about how to prevent Afghanistan from becoming a safe haven for Islamic terrorists."

Looking into the future will be key to what role the United States plays in Afghanistan and where it focuses its¬†efforts in the war on terror.

Some of the focus of the war may, in fact, depend on the information from bin Laden's compound that intelligence officials are combing through now.¬† Perhaps new clues and details may provide insight into the terrorist organization - and whether the United States should continue to focus on Afghanistan or divert resources, both financially and with troops, elsewhere.

People who have a healthy lifestyle before Covid-19 infection may have a lower risk of long Covid than their peers,‚Ätwitter.com/i/web/status/1‚Ä¶JE
cnni

People who have a healthy lifestyle before Covid-19 infection may have a lower risk of long Covid than their peers,‚Ätwitter.com/i/web/status/1‚Ä¶JE
cnni