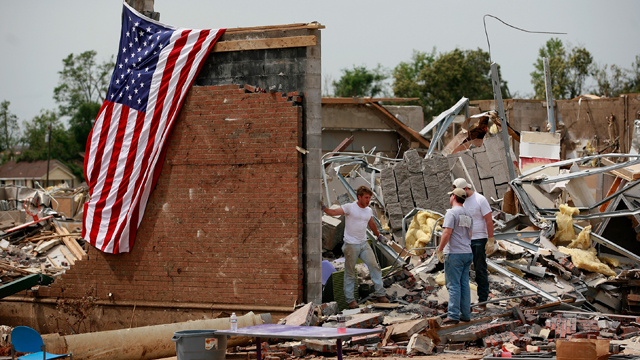 Gotta Watch: The tornado story that was

Until the royal wedding and death of Osama bin Laden grasped the nation's attention, the country focused on the tornadic devastation that killed hundreds and leveled towns. The severe weather, which smacked several states, spawned at least 178 tornadoes - making it the largest tornado outbreak in U.S. history. In today's Gotta Watch we revisit the survivors of the storms and find out what's next for the distressed victims and towns.

Looking on the bright side – Only the steps of Josh Spurgin's home remain. A day after a tornado ripped through his Higdon, Alabama neighborhood, all he saw was remnants of his home and a community demolished. Despite losing neighbors to the storms, the 23-year-old is concentrating not on the loss, but on all the outpouring of support people have offered him and his family.

A post-tornado town – A Georgia couple toured their hometown just minutes after the storm passed. The result is a harrowing look at an area crippled by tornadic damage.

Trying to survive a twister – As the tornado barreled toward their home, one couple hunkered down in their basement and prayed for survival.Â  After the storm passed, they were shocked to see their home and neighborhood destroyed.