The House January 6th committee's unexpected sixth hearing is underway and will include public testimony from a forâ€twitter.com/i/web/status/1â€¦LT 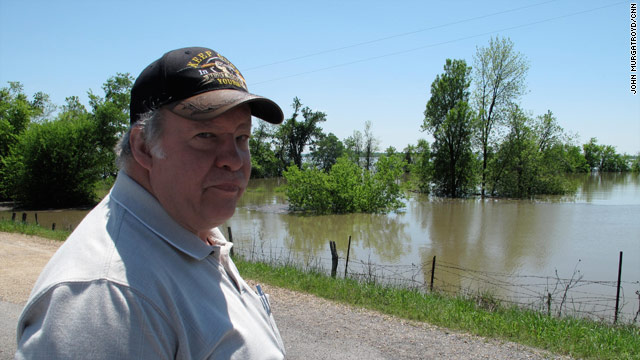 iReport: Are you there? Share your photos and videos from the scene, but please stay safe.Â

He plants wheat, corn and soy beans on the property. Byrne said his year is over unless the water gets off his land quickly.

"If we can get a soy bean crop planted by middle of June, first of July, we'll make crop," he said.

He already planted wheat and prepared the land for corn.

Norbert Rolwing, 93, farmed land in the flood plain during the record-setting flood in 1937.

"This is one of the things that happens once in a great while and you just have to take it on the chin," Rowling said.

"Our heart goes out to those people, but the challenge that we're forced to make here is how to balance the management of these rivers for people and nature, and there's communities up and down stream that had to be factored into this decision, as well," Reuter said.

Still, that doesn't make Byrne feel any better about his property.

"If the water doesn't get off and the land doesn't dry up, I'm going to have to do something else," he said.

A group of Missouri farmers have filed a class action lawsuit against the federal government for the decision to blow the levee. Though the Army Corps has flowage easements attached to the farmer's property, the class action suit reportedly is asking for compensation for taking their land.

"Way back in the Depression days when anybody would do anything to get a penny, that's when they got all of the easements on this kind of stuff," Byrne said.

Though he is not part of the legal action, Byrne said he will be studying the class action suit and will most likely join.

Germany will return a goddess statue that was stolen from Cameroon 120 years ago, the Prussian Cultural Heritage Foâ€twitter.com/i/web/status/1â€¦tN
cnni

7:58 am ET June 29, 2022 RETWEET
More than 7 million people in Bangladesh are in desperate need of shelter and emergency relief after what one aid aâ€twitter.com/i/web/status/1â€¦jS
cnni

3:13 pm ET June 28, 2022 RETWEET
Ghislaine Maxwell has been sentenced to 20 years in prison for carrying out a years-long scheme with Jeffrey Epsteiâ€twitter.com/i/web/status/1â€¦gy
cnnbrk

2:49 pm ET June 28, 2022 RETWEET
Trump wanted to go to the Capitol and lunged at the steering wheel and Secret Service who were stopping him from goâ€twitter.com/i/web/status/1â€¦sX
cnnbrk

2:10 pm ET June 28, 2022 RETWEET
The House January 6th committee's unexpected sixth hearing is underway and will include public testimony from a forâ€twitter.com/i/web/status/1â€¦LT
cnnbrk