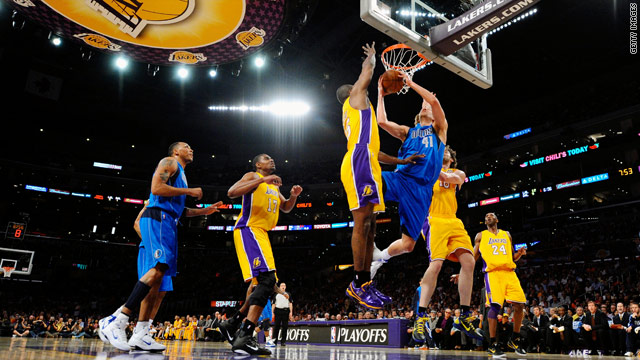 Dirk Nowitzki of the Dallas Mavericks goes up for a shot between Ron Artest and Pau Gasol of the Lakers Wednesday.
May 5th, 2011
11:49 AM ET

If you're the Los Angeles Lakers, now might be a good time to start worrying. With their second-consecutive Western Conference semifinals loss to the Dallas Mavericks, the reigning champions are looking less and less likely to deliver possibly departing Phil Jackson his 12th NBA title.

As SI.com's Sam Amick explains the Mavs' 93-81 rout of the Lakers was not simply the result of another lackluster performance from forward Pau Gasol. Or a virtually nonexistent defense that did little to stop the charges of Mavs point guard J.J. Barea. Instead, the toll of the playoffs could finally be catching up to L.A. "The Lakers continue to downplay the fatigue factor, not only from this season in which the target remained firmly on their back, but also the miles logged from three straight trips to the Finals," Amick writes. "Whatever the reason, the mountain of evidence against them is now taller than Bynum and Gasol combined."

While it's too early to completely rule out a Lakers comeback, if Games 1 and 2 were any indication, Los Angeles has its work cut out for it if the team is going to reconceptualize its defense, utilize a far more pass-driven offense and stage an impressive comeback.

Up tonight: Vancouver Canucks vs. Nashville Predators (8:30 p.m., ET) - In Game 4 of the Western Conference Semifinals, the Canucks are hoping that a home-ice advantage could be just what they need to tie up the series.

2:45 a.m. - Time the Los Angeles Angels beat the Red Sox in the seven-hour marathon game last night. The Angels took the win after Bobby Abreu nailed a two-run homer in the 13h.

118 - Number of first-place votes Rookie of the Year Blake Griffin received this year. Griffin played in 82 games for the Clippers, finishing 12th in the NBA in scoring (22.5) and fourth in rebounds (12.1).

12:01 am ET June 23, 2021 RETWEET
For many members of the global #FreeBritney movement, an appearance by the singer at a court hearing on Wednesday fŌĆtwitter.com/i/web/status/1ŌĆ”lS
cnni

11:58 pm ET June 22, 2021 RETWEET
A woman in Thailand found an unexpected visitor in her house in the middle of the night last weekend ŌĆö a wild Asiantwitter.com/i/web/status/1ŌĆ”aVTh
cnni