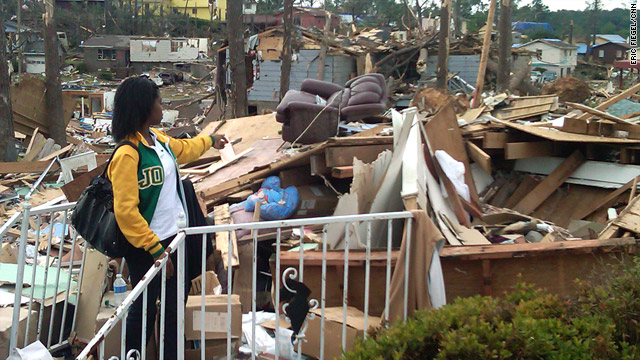 Renarda Archie stands on the steps of the destroyed Pratt City home where she and her family rode out the deadly storm.
May 6th, 2011
11:32 AM ET

Prom night is fast approaching, and the halls of P.D Jackson-Olin High School are filled with excitement.

"Been trying on dresses for days, haven't found one that fits," said Brandi Johnson, 18, a senior at the school in Birmingham, Alabama.

Rooms are overflowing with dresses and shoes. An office is being used as a dressing room. The girls stream in and out, trying to find the right dress.

"Not even at the prom shop did I have this many choices," Johnson said while trying on her 10th dress, still looking for that perfect one.

The school wasn't damaged by the tornadoes that tore across the region last week, but some of its students' homes were destroyed, and some lost everything.

In neighboring Shelby County, a room is filled with racks and racks of donated prom dresses that have been arriving around the clock from as far away as Texas.

"They're just looking for a way to help, and this is a tangible way. A lot of people have said, 'I can do that; I have dresses hanging in my closet,' " said Cindy Warner of the Shelby County School District.

Warner says that in the days after the violent storms, she received a request from a local school that needed 30 prom dresses for students who had lost everything. Word got out through local and social media. The response was overwhelming: In less than a week, more than 1,000 have shown up.

Helping the cause is Belinda Huckabee, from nearby Hoover, Alabama, who showed up with a carload of toys, clothing and prom dresses.

"For a girl not to have a beautiful dress to wear to prom, what a shame," Huckabee said while unloading her grown-up daughters' dresses. "When you dress up, it's time to look gorgeous or handsome and escape."

Renarda Archie, 16, says she was lucky to escape the storms alive. Her house was destroyed by the ferocious winds.

"Somebody please wake me up from this bad dream," Archie recalls saying just moments after the storm hit.

She rode out the twister in the den with her parents, sister, grandmother and uncle as the walls came crashing in on her head. "I'm so happy and thankful my family is alive," Archie said in front of piles of debris where her house once stood.

The home in Pratt City, a neighborhood just outside Birmingham, is the only house her father has ever lived in.

"It hurts. It's all I know," said her father, also named Renarda Archie.

On Thursday, it was time for Archie, a junior, to pick out her dress for the big night, only 16 hours away. It's a night most students thought was lost when the deadly storms came.

She beamed while trying on her dress and shoes. "I never thought someone would do this for me," Archie said as a group of teachers helped with her outfit.

For students like Johnson and Archie, it's a chance for normalcy, even if it's just for one night.

"It can be like that day that nothing happened, the storm didn't happen. It will be a special day for me," said Johnson, whose apartment was damaged by the storm.

She finally found that perfect dress, a bright pink one. "This is the one. I like it. I wanted to be a Cinderella, " Johnson said.

At Friday's prom, she can be.

It looks like the ultimate sports power couple are engaged. Sue Bird posted a photo on Instagram where Megan Rapinoâ€twitter.com/i/web/status/1â€¦T4
cnni