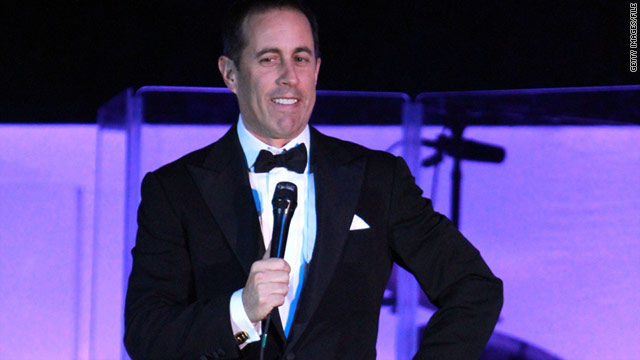 The comedian went digital Friday with the launch of his own website featuring his standup routines. JerrySeinfeld.com will be the home for video of nearly every recorded comedy performance given by Seinfeld - more than 1,000 clips. He told The New York Times that being able to relay original ideas to an audience is one advantage of putting his content on the Web. "Why would I talk to a TV executive at this point, and ask them what they think? If I have this idea for a TV show, I can just put it up on the internet."

The MTV Networks chairman and CEO is stepping down, parent company Viacom announced on Thursday. McGrath, 58, started at MTV in 1981 as a copywriter and was named to her most recent role in 2004. During her tenure, she produced the Hope for Haiti telethon, partnering with more than 20 television networks to broadcast it commercial-free. The event set a record for public giving, raising more than $60 million. In a statement, McGrath, who will not be replaced, said, “I leave with pride, joy, and gratitude for the ride of a lifetime."

The legendary Boston Celtics player and civil rights activist will be honored with a statue in the Bay State’s capital, the Celtics announced this week. The Boston Globe reports when Russell was invited to the White House in February to receive the Presidential Medal of Freedom, President Obama asked the 12-time NBA All-Star why his legacy had not yet been commemorated in a city that had honored so many of its sports legends throughout the years. “I hope that one day in the streets of Boston, children will look up at a statue built not only to Bill Russell the player, but Bill Russell the man,” Obama said.

Russell helped bring 11 NBA titles to Boston, but was also a figure in the city during the civil rights movement. He was at the National Mall in Washington in 1963 for the Rev. Martin Luther King’s “I Have a Dream” speech, and when his teammates were denied service in certain cities, he sat out games in protest. He later became the NBA’s first black coach when he took over for acclaimed Celtics coach Red Auerbach.