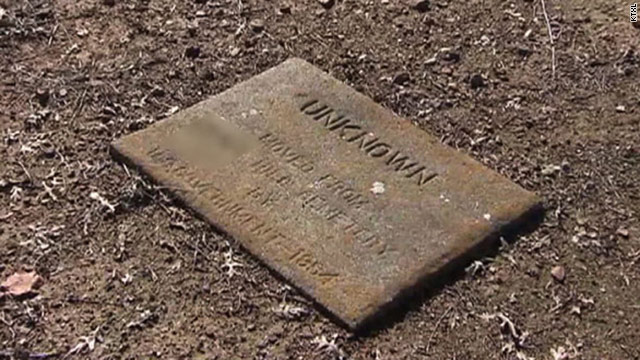 On gravestones taken from the Negro Hill Cemetery, the word “Negro” has been replaced with a racial epithet.
May 6th, 2011
03:30 PM ET

After more than a half-century, gravestones etched with racial epithets in a California cemetery may be replaced, thanks to a plan by the California Prison Industry Authority.

The graves, in Mormon Island Cemetery in El Dorado Hills, were transferred from a cemetery in a town called Negro Hill to make way for the construction of Folsom Dam.

On the gravestones, the word “Negro” has been replaced with a racial epithet.

On Thursday, the California Prison Industry Authority offered to replace the gravestones free of charge.

“That graveyard is right around the corner from our offices, and it’s pretty easy to know that that’s the right thing to do,” Charles Pattillo, general manager of the authority, said Friday.

"If we can help the Army Corps of Engineers and the county and restore some honor and dignity to the people that are buried there, then that’s what we’ll do,” Pattillo said.

The El Dorado County Administrator's Office supports the plan, but the process, like many things in government, may be slowed by bureaucratic red tape.

"The prison authority's offer was a great offer and unexpected," said Mike Applegarth, a spokesman for El Dorado County. "We all want to see this project make it through, but it may take some time, a few weeks or so," he said.

Although the offensive term has riled members of the community for years, and many have tried to get the markers replaced, according to CNN affiliate KXTV, no one knew when the word had appeared on the markers - until now.

This week, the U.S. Army Corps of Engineers released 1950s-era records on the construction of Folsom Dam. Also included were documents related to the relocation of  several cemeteries, including Negro Hill. The epithet is repeatedly used in the documents.

In the 1950s, the Army Corps of Engineers completed the relocation of the gravesites, "transferring all original markers where we found them," Lt. Col. Andrew B. Kiger wrote in a letter on the Corps of Engineers website. "Finding none at Negro Hill, we marked the graves with new ones, noting the name of the original cemetery by another, deeply offensive slur," he said.

"We don’t know why, when in so many other instances the cemetery was called Negro Hill, the new gravestones and our records use the more offensive word. Our records contain no documentation of its original designation. Yet this word appears throughout these records; in contracts, in project maps, in legal affidavits, signed by local, state, and, of course, federal officials," Kiger wrote.

“We can only say with certainty that it is reflective of a shameful period in American history when racial intolerance was commonplace,” he said.

Last month, county officials met to discuss the issue but took no action, according to CNN affiliate KCRA.

"To see this is unacceptable," Ralph White of the Stockton Black Leadership Council was quoted by KCRA as saying at the time. "That word won't be there another year. Either God's going to remove it, or Satan will know what to do about it," White said.