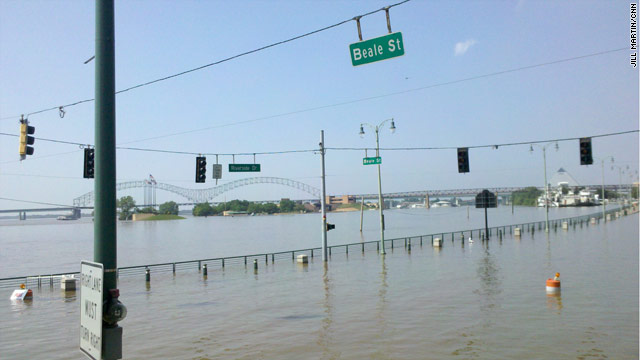 Some roads near downtown Memphis, Tennessee, were flooded Sunday. The Mississippi River is expected to crest in Memphis on Tuesday morning.
May 8th, 2011
08:24 PM ET

Hundreds of people have been told to evacuate low-lying areas near Memphis, Tennessee, as the Mississippi River - one of the swollen rivers that has forced people from their homes in six states this month - is expected to crest there at a near-record level. Here is a look at this and other stories that CNN plans to follow this week:

Although downtown Memphis isn't expected to have serious damage from the flooding, some Memphis-area streets near the river already are underwater, according to the weather service. The weather service says the river may not fall below flood stage until June.

The flooding in the Mississippi and Ohio river valleys has already forced people from their homes in Missouri, Illinois, Indiana, Tennessee, Kentucky and Arkansas.

The United States and Pakistan is sorting through their complicated relationship after last week's U.S. raid that killed Osama bin Laden in a compound in Abbottabad, Pakistan. Pakistan'sÂ prime minister, Yousuf Raza Gilani, is expected to deliver a new terrorism-related policy statement Monday as the Pakistani parliament opens a debate on the U.S. raid.

U.S. officials say Pakistan is a critical ally in the fight against terrorism, but they're also demanding answers to questions about bin Laden's presence in that country over what they say was the last six years. Â Pakistani leaders say they didn't take part in either the establishment or the maintenance of bin Laden's safe haven. Pakistan's U.S. ambassador, Husain Haqqani, told ABC on Sunday that the United States shouldn't have conducted a raid in Pakistan without Islamabad's awareness or consent.

Meanwhile, a U.S. task force is combing through material that U.S. commandos took from bin Laden's Abbottabad compound. Â It's unclear what information the federal government might release from that material, or when it would do it. But the government already has released videos of bin Laden and information about preliminary discussions of a rail threat.

U.N. Security Council to get humanitarian brief on Libyan conflict

The U.N. Security Council authorized nations to enforce a no-fly zone over Libya and take "all necessary measures" short of an occupying force to protect Libyan civilians from attack by government forces. Planes from NATO, which took control of coalition airstrikes in late March, still are targeting pro-government forces, hitting tanks, other military vehicles and an ammunition storage site on Sunday alone.

Another matter to keep an eye on this week: Libyan rebels say Italy has agreed to arm them, but the Italian Foreign Ministry has denied that it will send weapons to Libya.Â A press office spokesman said Italy will only go as far as sending nonlethal material, such as satellite and radar systems.

Trial of U.S. hikers in Iran to resume

A trial of three American hikers charged with espionage in Iran is expected to resume on Wednesday after a three-month break. Â The three were hiking together in Iraq's Kurdistan region when they were detained by Iranian border forces on July 31, 2009, for allegedly crossing into Iran illegally.

Shane Bauer, 28; Sarah Shourd, 32; andÂ Josh Fattal, 28, were charged with spying. They have pleaded not guilty.

Shourd returned to the United States in September after being released on $500,000 bail because of a medical condition. She said she will not return to Iran, which has said she will be tried in absentia. Iran has held Bauer and Fattal since their 2009 arrests.

The United States' first full face transplant recipient is scheduled to leave a Boston hospital on Monday, about two months after the 15-hour procedure. Dallas Wiens, of Texas, received the transplant in mid-March, more than two years after he was injured by a high-voltage line.Â The forehead, nasal structure, nose, lips, facial skin and underlying muscles and nerves were transplanted.

Wiens is the second person in the world to receive a full face transplant. The first such transplant happened in Spain last year.

A verdict is possible late this week in the trial of a retired U.S. autoworker accused of being an accessory to murder as a guard at a concentration camp during World War II.

Accusations against Demjanjuk date to the late 1970s.

A number of state and private challenges have been made against the Patient Protection and Affordable Care Act; the legal war is expected to eventually end up in the Supreme Court. Federal judges so far have split on whether a key provision - the "individual mandate" requiring most Americans to purchase health insurance by 2014 or face financial penalties - is constitutional.

U.S. President Barack Obama is expected to deliver a speech promoting comprehensive immigration reform on Tuesday in El Paso, Texas. The speech comes about six months afterÂ the DREAM Act, an immigration reform proposal, was defeated by a Republican filibuster in the Senate.

Some immigration reform advocates have argued that Obama could bypass Congress and issue an executive order to bring changes intended to help children of illegal immigrants eventually gain U.S. citizenship. But ObamaÂ appeared to rule out acting on his own last month.