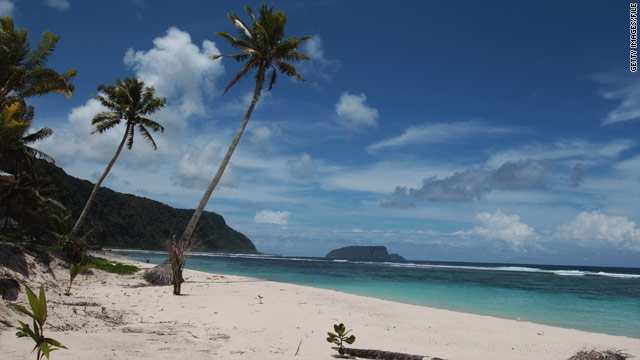 Samoa's prime minister says tourists can double celebrations by holding them once on each side of the international date line.
May 9th, 2011
08:32 AM ET

Got a special day you'd like to celebrate twice next year? Say your birthday or maybe that 25th wedding anniversary.

Then book a trip to the Samoan Islands in the South Pacific, where, come 2012, you can redo the previous 24 hours with just a 30-minute flight.

The Cabinet of Samoa last week approved a plan to move the islands of that nation to the western side of the international dateline. But the islands that make up American Samoa, a U.S. territory, will remain to the east of the dateline. The islands are a little more than 80 miles apart.

Samoan Prime Minister Tuilaepa Sailele Malielegaoi said the change is necessary to facilitate business, as his country conducts most of its commerce with New Zealand, Australia, China and Southeast Asian nations.

"In doing business with New Zealand and Australia we're losing out on two working days a week. While it's Friday here, it's Saturday in New Zealand and when we're at church Sunday, they're already conducting business in Sydney and Brisbane," Tuilaepa is quoted as saying in the government-owned newspaper Le Savali, reprinted on Samoanews.com.

Samoa and American Samoa were moved east of the dateline in 1892, according to the Le Savali report.

"A local trader lobbied successfully for the change as it was convenient for trading ships from Europe and the United States that were servicing Samoa at the time," the prime minister is quoted as saying.

But besides helping Samoa conduct business,Â Tuilaepa says it could bring tourists to American Samoa, too.

Tuilaepa told Radio Australia that the change has been cleared with international time zone authorities. It awaits expected approval in Samoa's Parliament.

John Kerry's Shanghai visit tests whether US and China can cooperate and disagree at the same time | Analysis byâ€twitter.com/i/web/status/1â€¦vt
cnni