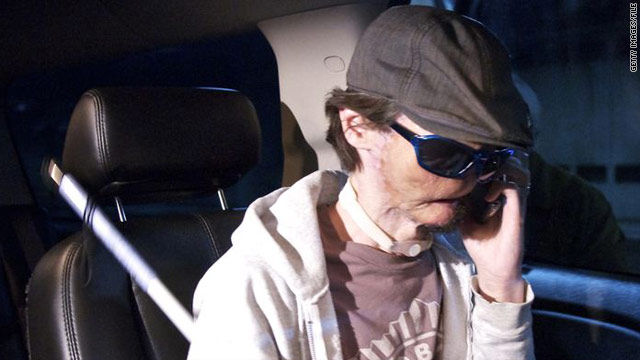 Face transplant recipient Dallas Wiens arrives at Brigham and Women's Hospital in Boston on March 21.
May 9th, 2011
06:33 AM ET

Face transplant: The United States' first full face transplant recipient is scheduled to leave a Boston hospital on Monday, about two months after the 15-hour procedure.

Dallas Wiens, of Fort Worth, Texas, received the transplant in mid-March, more than two years after he was injured by a high-voltage line.Â The forehead, nasal structure, nose, lips, facial skin and underlying muscles and nerves were transplanted.

Doctors were not able to restore Wiens' sight.

Wiens is the second person in the world to receive a full face transplant. The first such transplant happened in Spain last year.

Wiens is scheduled to speak at a press conference at 11 a.m. which will be available on a live webcast.

Anthony, 25, has been charged with capital murder in the death of her 2-year-old daughter, Caylee. She also faces six other charges, including aggravated child abuse, aggravated manslaughter of a child and misleading law enforcement.

Caylee was reported missing by her grandmother in July 2008, about a month after she was last seen. It wasn't until five months later that investigators found her remains.

Prosecutors contend that Anthony used "a substance" to kill her daughter.

Endeavour was scheduled to depart from the Kennedy Space Center in Florida on April 29 for a mission to the international space station, but the liftoff was postponed after a problem was discovered in a heater circuit associated with the shuttle's hydraulic system. Engineers have replaced hardware that could be responsible for the problem and systems are being tested, the agency said Friday.

After Endeavour's 16-day mission, only one space launch remains. The shuttle Atlantis will cap the 135-mission shuttle program when it journeys to the space station with a liftoff scheduled for June 28.