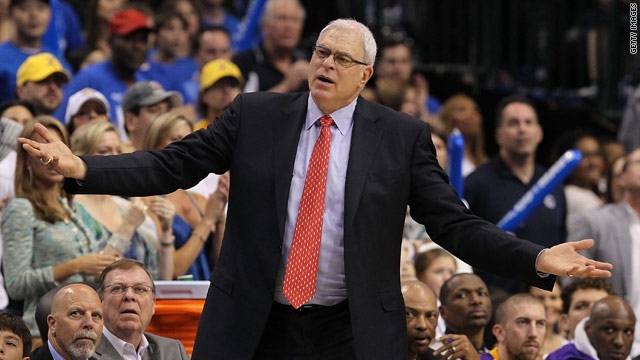 Phil Jackson and his 11 championship rings are leaving the Lakers after the defending champs were knocked out of the playoffs.
May 9th, 2011
05:53 PM ET

It probably wasn't the way Phil Jackson hoped to end his run with the Los Angeles Lakers, but don't think for one second that his legacy is tarnished. The 65-year-old coach sat nearly helpless as his team fell apart Sunday night, giving the Dallas Mavericks a four-game sweep. But, as SI.com's Jack McCallum explains, Jackson's impact on the NBA and his accomplishments as a coach are virtually unmatched, despite a lackluster playoff performance by the defending champions.

"We have to assume that this exit is permanent (he swears it is), and so does the 65-year-old Jackson exit having fallen short of his fourth three-peat," McCallum writes. "Of course, using falling short in conjunction with Jackson's career is just wrong, and not just because he stands 6-foot-8 and seemed taller than that when he was walking with two good hips and two good knees. Jackson won 70 percent of his regular-season games and 69 percent of his playoff games, and there is the small matter of his 11 championship rings. That makes him perforce the most successful coach in NBA history (no objective argument to the contrary is possible), and I would argue that he is also the best."

With the Lakers out of title contention, speculation will turn to whether Jackson will stick to the course and exit the NBA for good or parlay his extensive experience to a GM position or other official capacity in the league.

Miami Heat vs. Boston Celtics (7 p.m. ET): At home, the Boston Celtics, sporting an injured Rajon Rondo and Delonte West, will battle the Miami Heat in Game 4 of the Eastern Conference semifinals.

Vancouver Canucks vs. Nashville Predators (8 p.m. ET): The Canucks, holding a 3-2 series lead, can advance to the NHL's Western Conference final with a win at Nashville tonight.

1,000: Number of regular-season wins Mike Scioscia has notched as manager of the Angels.

105: Number of starts it took Sprint Cup driver Regan Smith to notch his first win in the series. He took the checkers at Darlington Raceway on Saturday night.