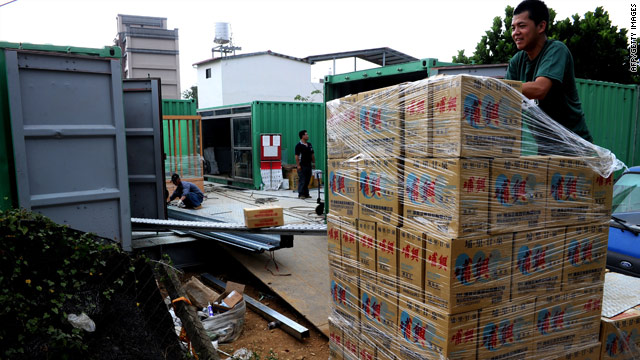 Supplies and shipping container homes were being assembled Tuesday for a doomsday blogger and his believers in Puli, Taiwan.
May 10th, 2011
11:25 AM ET

A Taiwanese man is predicting that a massive earthquake will strike Taiwan on Wednesday morning, killing more than a million people, but an official with the country's National Science Council says there's no indication of any seismic movements.

The self-proclaimed prophet, a blogger who calls himself Teacher Wang, has predicted that a 14-magnitude quake will strike the island atÂ 10:42:37 a.m. local time Wednesday. It will be followed by a massive tsunami more than 550 feet (170 meters) high on May 17, Wang has said, according to news reports from Taiwan.

"The final countdown has started," the prophet, whose real name is Wang Chao-hung, told Agence France-Presse on Tuesday, according to a report in the Straits Times.

The dual catastrophes will "rip the island in half," Wang has said, according to a report on Focus Taiwan.

Wang has been assembling hundreds of shipping containers in Puli in Nantou County to shelter himself and his followers, the China Post reported. Tons of rice along with bottled water and diesel fuel have been stockpiled, news reports said.

But National Science Council Deputy Minister Chen Cheng-hong told Focus Taiwan that checks of earthquake indicators, including groundwater levels, soil gas composition and magnetic intensity, have given no indication of an impending superquake.

The largest earthquake ever recorded was a 9.5-magnitude temblor in Chile in 1960, according to the U.S. Geological Survey. March's earthquake off Japan measured 9.0 in magnitude and spawned a deadly tsunami.

5:00 am ET March 9, 2021 RETWEET
"As millions watched Oprah Winfrey's interview with Prince Harry and Meghan, Duchess of Sussex, one of the most strâ€twitter.com/i/web/status/1â€¦Qo
cnni