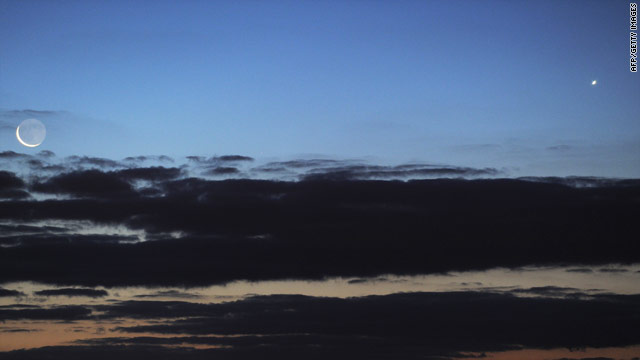 As if you needed another reason to get up before sunrise, four bright planets will cluster in the predawn sky Wednesday morning so close together they'll probably fit behind your outstretched hand (from where you stand, of course).

Throughout May, the planets Mercury, Venus, Mars and Jupiter will rearrange themselves on a daily basis to form different shapes in the eastern sky.Â The show ends with a grand finale on May 30, when a crescent moon joins the four planets.

The best view will be about a half hour before sunrise on Wednesday, when Venus and Jupiter will be so bright "you might think you've witnessed a double supernova beaming through the morning twilight," scientist Tony Curtis said on NASA's Science News site.

The whole patch will be less than 10 degrees wide. Venus and Jupiter will be only a half degree apart, Curtis said.

TIME.com: Does the planets' alignment augur the end of the world?

"Keep an eye on Venus in particular. As the sun rises and the sky fills with morning blue, the Goddess of Love does not fade away. You can actually see Venus in broad daylight if you know where to look," he said.

Venus, the brighter of the two, will be to the right of Jupiter, the editors of StarDate magazine said last week. Mercury will be visible to the lower right of Venus, about the same distance from Venus to Jupiter. It won't be as bright but its proximity to Venus will help you find it. To the lower left of Jupiter, you'll find Mars, which may be too low and faint to see without the aid of binoculars.

Mercury, Venus and Jupiter will form a bright celestial triangle in May almost equilateral in appearance. On May 20, a new triangle will appear with Mars, Venus and Mercury forming the vertices.

Did you see them? Send us your images!

This is an appreciation tweet for American farmers & ranchers. They make up less than 2 percent of the population aâ€twitter.com/i/web/status/1â€¦zf
sarasidnerCNN