US formally names Russian Foreign Intelligence Service as the culprit behind the SolarWinds cyber hack and imposes‚Ätwitter.com/i/web/status/1‚Ä¶Dg 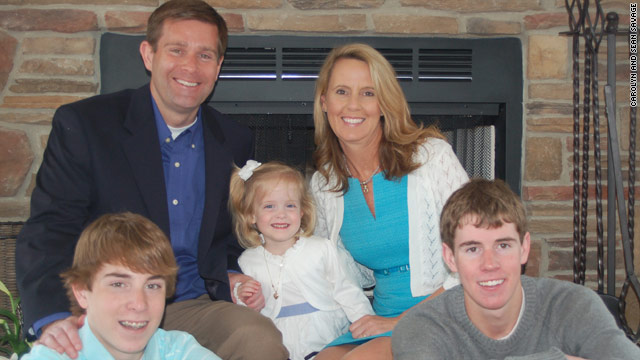 Sean Savage's third child was conceived via IVF and his wife carried another couple's baby to term after a transfer mistake.
May 10th, 2011
05:28 PM ET

Overheard on CNN.com: Can the Catholic Church change?

Comment of the day: Not just anyone would be able to carry a baby to term and hand him over after birth. You are truly amazing people. -Summer819

In a CNN.com "Belief Blog" post, Sean Savage explains why he believes the Catholic Church should reverse its opposition to in vitro fertilization, challenging the church‚Äôs stance that the only moral route to conceiving a child is through sexual intercourse. Savage, a lifelong Catholic, is the co-author of a book about the subject. He and his wife pursued IVF¬Ýbut accidentally received an embryo belonging to another couple. The mistake generated an intense media storm, and the day the child was born, the Catholic Diocese of Toledo, Ohio,¬Ýpublicly condemned IVF as "morally unacceptable.‚Äù

CNN.com readers who had either conceived or were conceived via IVF appreciated the column.

Jamie said, ‚ÄúThank you for sharing your educated, well-expressed opinion. In a perfect world, couples won't have to choose between their church and their desire to build a family.‚Äù Charlie¬Ýsaid, ‚ÄúI also want to thank you for your article. As the Catholic parents of a beautiful boy conceived through IVF we also feel blessed by God and in no way do we feel that we did anything wrong. The Catholic Church should understand that it is not only science involved in the process, but the blessing of God.‚Äù Amy¬Ýsaid, ‚ÄúWhat a great article. I am a Catholic mother and we conceived our daughter using IVF. My husband had cancer as a child, which gave us little chance of ever naturally creating a child. God truly blessed us with our daughter and how she became is still a gift from God.‚Äù Tova¬Ýsaid, ‚ÄúI am a woman conceived by IVF. My parents are Catholic – I left the church as a teenager, almost entirely because of this issue. I am here because I am meant to be here. It is not that my parents 'were not meant to have children' (though that's what my priest cousin told them, and that they should repent when they became pregnant with me).‚Äù

Others without an apparent connection to IVF ¬Ýshared their thoughts about the controversy.

BigQuestions¬Ýsaid, ‚ÄúIf you believe that life begins at conception, IVF¬Ýessentially results in the creation of many children, most of which will die before they even reach the womb (IE, many embryos do not survive thawing). If you believe that life begins at some other point along the path of pregnancy, you have started down a slippery slope that is used to rationalize abortion, etc. My wife and I have compassion for everyone else who is faced with these decisions. Ultimately we decided that we cannot set an arbitrary point when life begins and as such, couldn't go through with IVF.‚Äù Mario said, ‚ÄúHuman life begins when an embryo is properly attached to the womb. Until this happens, the embryo is not a human being. This is the current approach in science. Moreover, Jesus Christ was not the product of a conjugal act.‚Äù Eric said, ‚ÄúIf you check the scientific research, you will see that most ‚Äònaturally‚Äô conceived embryos do not survive either. Most of the time, a failure to properly implant in the uterine wall or an error in early cell division results in a spontaneous miscarriage, often before the woman has any idea that she is pregnant.‚Äù

Other readers either shared their support for the Catholic Church or condemned their stance on IVF.

David said, ‚ÄúI pray that we all look into our hearts to follow not what we want, or what we think is right, but what is right. We must be careful not to let what we say lead others astray. The church is our mother, who leads and guides us. It is not easy, but in the end it will be so comforting. May we all pray for God's mercy, guidance and understanding.‚Äù Dan responded, ‚ÄúDavid is somehow assuming that the Catholic Church is always right and people shouldn't think for themselves. David is wrong and that is a very dangerous position to take.‚Äù *SIGH* said, ‚ÄúIf you are Catholic, you must accept the pope as the hand of God. In other words, the pope is your God. Live with it happily or find a church that is in line with your beliefs if you are not going to accept Catholicism in full and just piecemeal.‚Äù Michael said, ‚ÄúSean: You and your family certainly deserve compassion here. As a fellow Catholic, I hope the lord gives you his grace to bear the cross of infertility. Also know that I am sure many have prayed for you and your family and perhaps even your bishop, who was likely well-intentioned to avoid confusion on the issue but missed the mark on compassion.‚Äù

Japan‚Äôs Prime Minister, Naoto Kan, said Tuesday that he will give up his salary until the nuclear crisis in the country is over. CNN.com readers praised his decision and questioned whether U.S. leaders would ever do the same.

kevinweslyn said, ‚ÄúAn inspirational gesture. The disaster was not at all his fault or responsibility, yet he shows this solidarity with the Japanese people in order to underline how the populace is connected.‚Äù¬Ýiperlady09 said, ‚ÄúI'm amazed by the honor and self-restraint the Japanese people have shown over the last few weeks. This sacrifice shown by the prime minister is how one truly leads by example.‚Äù

newsound said, ‚ÄúWould ANY U.S. politician show such benevolence and vision? Not in a million years!‚Äù AlienShark said, ‚ÄúBloomberg doesn't take a salary for the position of mayor ... just sayin.‚Äù

Guest¬Ýsaid, ‚ÄúWould that every rich CEO do something like this. We would be back in black in no time. Great sacrifice there, PM. Blessings to you!" marjie said, ‚ÄúThe CEO of my husband's company didn't take a salary for several years rather than let employees go without jobs or raises. I was very impressed that he cared that much."

Bobby56 said, ‚ÄúI wish Congress would do the same thing since they bankrupted the country with mismanagement." vivismama said, ‚ÄúI agree, maybe after that they could be able to raise minimum wage so people just might be able to survive on it.‚Äù

After¬Ý25 years of marriage, Arnold Schwarzenegger and Maria Shriver have announced that they are separating. The news came as a surprise to many readers who posted comments of support, while others took the opportunity to work in some of Schwarzenegger‚Äôs most popular movie lines.

misstrixie said, ‚ÄúThat's too bad. I have always liked this couple. Maybe they'll work it out."¬Ýfedupintexas said, ‚ÄúToo bad! I like Arnold and Maria! Glad he's making movies again!‚Äù And¬ÝFullyAutoMag said, ‚ÄúNice to see they can separate without going ballistic on each other.‚Äù

On a different note,¬ÝBSideSlater said, ‚ÄúI left my wife and now I'm looking for Sarah Conner.‚Äù

The 8th Congress for the Cuban Communist Party is timed to commemorate the 60th anniversary of Cuba's victory over‚Ätwitter.com/i/web/status/1‚Ä¶9o
cnni

5:48 pm ET April 15, 2021 RETWEET
The United States government and Gavi, the Vaccine Alliance, have kicked off a pledging event aimed at raising an a‚Ätwitter.com/i/web/status/1‚Ä¶1X
cnni

5:27 pm ET April 15, 2021 RETWEET
The UK's public broadcaster, the BBC, received over 100,000 complaints over the level of coverage of Prince Philip'‚Ätwitter.com/i/web/status/1‚Ä¶ip
cnni

5:05 pm ET April 15, 2021 RETWEET
The top American general responsible for troops in Europe said there has not been an equal distribution of vaccines‚Ätwitter.com/i/web/status/1‚Ä¶rL
cnni