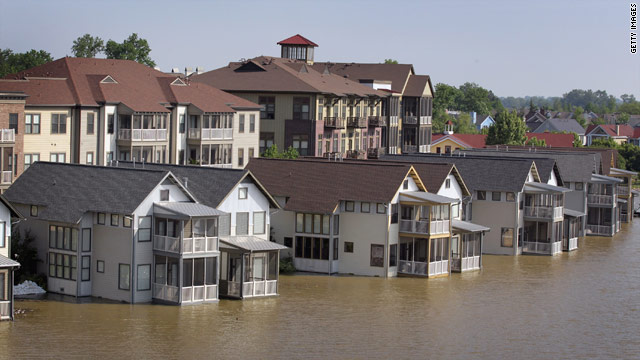 Townhomes sit in floodwater from the Mississippi River on Monday in Memphis, Tennessee.
May 10th, 2011
09:43 PM ET

The swollen Mississippi River on Tuesday was in the process of cresting many feet above flood stage in Memphis, Tennessee, and residents of states to the south are bracing for serious flooding in their communities.

A slow-moving wave of water has been working its way down the river since torrential rains sparked flooding in the Midwest's Ohio and Mississippi river valleys in late April. Hundreds of households were ordered to evacuate in the Memphis area (see pictures), where the river was expected to crest Tuesday around 48 feet - 14 feet above flood stage and less than a foot under the city's record level set in 1937.

The high water is headed for Mississippi and Louisiana, prompting authorities to open one spillway and consider opening another - moves meant to divert some of the water into less populated or unpopulated areas. Up to 5,000 homes will be evacuated in Mississippi, officials there say. In Louisiana, where the river is expected to crest next week, 21 parishes already have issued emergency declarations.

You will hear a lot about crests, spillways and levees over the next couple of weeks. Below you'll find what these mean and what the Army Corps of Engineers and others are doing to mitigate the flooding threat along the Mississippi.

When a river crests

The National Weather Service says a crest is the highest point in a wave. In the case of river flooding, it is the highest stage or level of a flood wave as it passes a particular point. Gauges along the river record the level of the water, and the highest level recorded at each gauge will be the crest for that gauge.

Observers generally know that cresting is occurring when the water level stops rising and becomes stable. However, it's difficult to identify the official crest at the moment that it happens, because during the cresting, small fluctuations happen - water levels can rise a little after they fall a little. The fluctuations are caused by factors such as wind and water currents.

The crest will have passed when the water level continuously decreases. Once this has happened, observers can note what the highest recorded level was. But the cresting of a river at a certain point doesn't mean immediate relief for that area - the water level will lower gradually, meaning flooding can still be a problem days after a crest. On Tuesday, communities in southwestern Illinois and southeastern Missouri still were flooded, days after crests there. In Memphis, although the river was cresting there Tuesday, residents could be dealing with high water levels into June.

Levees meant to keep river in its place

A 2,200-mile system of earthen levees, floodwalls and other controls were built along the Mississippi, Arkansas and Red rivers after a massive flood overwhelmed the southernmost stretch of the Mississippi River in 1927, according to the U.S. Army Corps of Engineers.

The levees guard riverside communities to some extent, but they are rarely tested with the kind of volume and pressure passing through the river now. On Monday in Memphis, the water was moving at 2 million cubic feet per second. At that speed, water would fill a football field at a depth of 44 feet, according to the Army Corps of Engineers.

Most levees are piles of dirt lined along edges of a river. In theory, vegetation and its roots will keep the dirt stable as water flows by. But levees can fail, in part because moving water can erode, saturate, undermine and destroy them. (Learn more about how levees can fail).

Floodways and spillways are places where the Army Corps of Engineers diverts water from a swollen river. In some cases, this involves intentionally flooding one populated area to prevent or lessen flooding in a more populated area.

On May 2, the Corps intentionally breached a levee near the confluence of the swollen Mississippi and Ohio rivers at the Missouri/Illinois border, sending some of the Mississippiâ€™s water into the New Madrid Floodway - which is 130,000 acres of Missouri farmland.

Missouri officials, wanting to protect the farmers' land, tried unsuccessfully to block the move. The Corps says the move was designed to prevent devastating flooding in Cairo, Illinois, and elsewhere downstream. (See pictures of New Madrid Floodway taken before, after the levee breach.)

The Corps estimates it will take up to two months for the water to recede from the floodway and another month for the land to dry out.

In Norco, Louisiana, the Corps this week opened 72 gates to the Bonnet Carre Spillway, north of New Orleans, diverting millions of gallons of Mississippi River water into Lake Pontchartrain and, eventually, into the Gulf of Mexico.

The agency is considering whether to open the Morganza Spillway, which is on the Mississippi north of Baton Rouge, Louisiana. When the spillway is opened, water would be diverted to the Atchafalaya Delta to the west and south of Baton Rouge, and could flood populated areas such as the town of Morgan City, which has 13,000 residents.