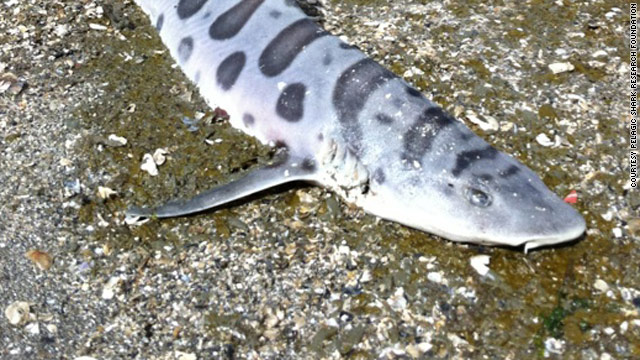 More than 100 leopard sharks have washed up dead over the past month around California's San Francisco Bay Area, according to a conservation and research group working with scientists to determine a cause.

At least four of the spotted creatures are being examined by a Department of Fish and Game pathologist now, said Sean Van Sommeran, executive director of the Pelagic Shark Research Foundation. Three of the sharks undergoing analysis have signs of infection in their digestive and nervous systems, Van Sommeran said.

"Leopard sharks are typically very tough and are rarely susceptible to getting sick," he said. "So this is alarming. The infection seems to come in through the nose and affects their eyes, blinding them and half-paralyzing them so that they cannot keep themselves from coming up on the shore with the tide."

He said it's possible that the canals in which the sharks sometimes swim are polluted with stagnant water where bacteria can thrive. If it's a matter of cleaning the water, that can be accomplished by installing aerators or other equipment.

Because the sharks live in salt water, there is no threat to the human water supply, he stressed.

Van Sommeran said it's likely that more than 100 sharks have been affected. An untold number may still be in the water or have already decomposed.