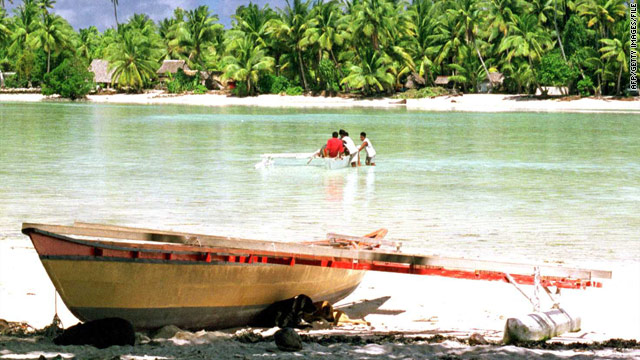 Canoe found in South Pacific, but no sign of 6 missing canoeists

A canoe that carried six missing people from Tarawa Atoll in the South Pacific nation of Kiribati has been found, but there is no sign of its occupants, including four girls under the age of 15.

The six - two 19-year-old men and girls ages 14, 12, 9 and 8 - went missing Friday when their 9-foot-long canoe drifted out of a lagoon near their village of Marenanuka and into the open ocean. The six were gathering palm fronds for roof thatching when they were lost.

The New Zealand Rescue Coordination Center, which is assisting Kiribati authorities in the search for the six, said Wednesday that a canoe spotted by a fisherman Saturday on Buariki, seven miles (11 kilometers) northwest of Tarawa, was the one the group was using. A search of nearby areas has turned up no sign of its occupants, however, according to a rescue center statement.

A New Zealand air force P3 Orion aircraft that has been searching for the missing canoeists since Sunday ended its mission Wednesday, but the rescue center said a U.S. Coast Guard C-130 Hercules will pick up search duties for the next three to four days.

Weather was not forecast to be helpfulÂ in search efforts, with a strong chance of thunderstorms through Thursday.