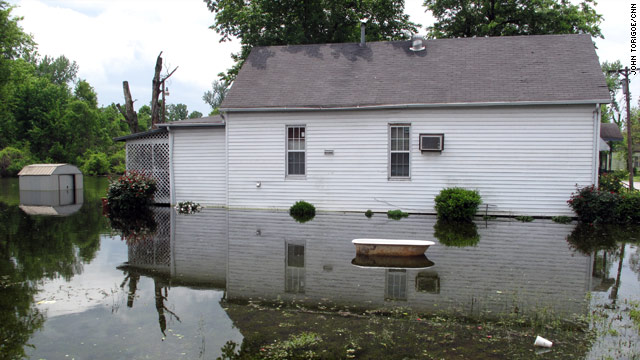 A bathtub in the yard of a home in Cairo, Illinois, on Wednesday, surrounded by Mississippi River water.
May 11th, 2011
07:52 AM ET

Louisiana flooding - As many as three million acres in Louisiana could be flooded by the surging Mississippi River, according to Gov. Bobby Jindal, who is urging residents to take precautions immediately. Rising water could reach levels unseen since 1927, which has many people fearful. The region is still trying to recover from Hurricane Katrina. Flooding has already forced casinos in Tunica, Mississippi, to close. About 600 people in Tunica have had to leave their homes.

Iran hikers trial delay - The trial of two American men whom Iran accuses of spying has once again been delayed. A Swiss diplomat tells CNN that Josh Fattal and Shane Bauer were not brought from jail to the courthouse Wednesday, and that no reason was given. Switzerland represents U.S. interests in Iran.Â Sarah Shourd, aÂ third U.S. citizen who was arrested on the border between Iraq and Iran in 2009 along with Fattal and Bauer and also accused of espionage, refused to attend Wednesday's hearing. Shourd, Bauer's fiancee, was released from an Iranian jail on bail last year and allowed to leave Iran on "humanitarian grounds."Â  Shourd said she would not return because she was suffering from severe post-traumatic stress disorder after spending 14 months in Tehran's notorious Evin prison.

California college shooting - Three people have been killed in a shooting in a parking garage on the campus of San Jose State University. Police say it's unclear if the victims were students. The identities of the deceased have not been released pending autopsy results.

Newt Gingrich's presidential run? -Â  The former Republican speaker of the House is expected to officially announce Wednesday that he's running for the White House in 2012. He's already been traveling to some of the early primary states like Iowa. At the Southern Republican Leadership Conference, Gingrich took jabs at President Barack Obama.

Nigerian recording artist Olamide has joined forces with a US company to bring more music from his home country toâ€twitter.com/i/web/status/1â€¦Zp
cnni

2:38 am ET September 28, 2021 RETWEET
Norway has moved into the highest-risk category on the CDC's list of travel advisories for destinations around theâ€twitter.com/i/web/status/1â€¦ga
cnni

2:01 am ET September 28, 2021 RETWEET
The earliest bird reared by humans may have been a cassowary, often called the world's most dangerous bird due to iâ€twitter.com/i/web/status/1â€¦r0
cnni