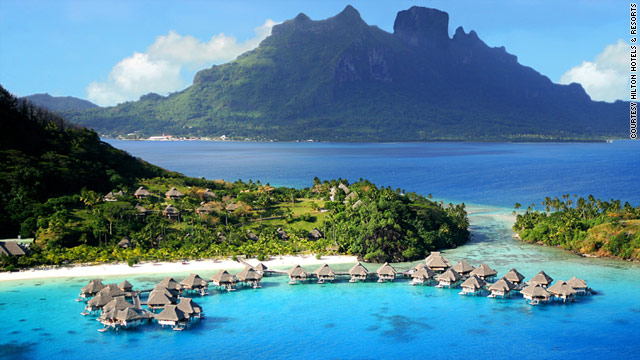 Overheard on CNN.com: When do we leave?

Comment of the day: "Maaaan! I need more money." -dallaslib

Apparently CNN.com readers are in a blue-water-vacation state of mind. One of the most popular stories on CNN.com today showcased five ‚Äúoverwater hut resorts‚Äù complete with iconic, thatch-roofed bungalows. Besides representing paradise on earth, "For everyone, they've come to typify romance," a travel agent says.

After reading the story (and looking at the pictures) readers said they are ready to pack their bags or, sadly, that they may never be able to afford the luxury trip.

lam81208 said, ‚ÄúDROOL!!!‚Äù elfmeister said, ‚ÄúThis article is EXACTLY why I play the lottery.‚Äù heyitsme said, ‚ÄúCome on 25th wedding anniversary!! That's all I'm sayin.‚Äô‚Äù SoonerLyno said, ‚ÄúYep, assuming I ever get married, I want to go there for my honeymoon.‚Äù makemlaff said, ‚ÄúI'm currently engaged and broke as a joke, but instead of a registry, I think hubby-to-be and I will ask for honeymoon contributions now!‚Äù ModeratelyMe said, ‚ÄúSo glad my wife isn't reading this article.‚Äù cmr35 said, ‚ÄúWow. Time to add another item to the bucket list.‚Äù pumpkinseeds said, ‚ÄúSome day.‚Äù Jpeters said, ‚ÄúGreat. I am now accepting donations. [This is] something I will never afford on a teacher's salary!‚Äù DontUGetIt said, ‚ÄúIn order to develop an informed opinion I will require an all-expense-paid vacation to one. Anybody want to help me out?‚Äù

Other readers shared their experiences:

entropy430 said, ‚ÄúJust got back from our honeymoon staying in an overwater bungalow in Bora Bora. What a pleasant surprise to log onto CNN for the first time in a week and see this.‚Äù fonzarelli99 said, ‚ÄúHoneymooned in Tahiti back in 2002. It has to be the most beautiful place on Earth. Stayed in the overwater huts on Moorea and Bora Bora and snorkeled right out from our balcony. Can't wait to go back, and this time surf Teahupoo.‚Äù STP1026 said, ‚ÄúWe honeymooned at Bora Bora Nui last year. The place was incredible. We opted for an extravagant honeymoon rather than an extravagant wedding and are very happy we did so. Can't wait to go back for whatever anniversary.‚Äù

And other readers made comments about the price tag.

renodakota said, ‚ÄúWe dropped $500 a night to stay in one of those bungalows in Bora Bora for our honeymoon last November for five days. Combined with the $40 breakfasts and $20 cocktails, yeah, it was staggeringly expensive.‚Äù malfunction said, ‚ÄúWow. Even though I could afford this for a bit I don't think I could feel comfortable at that nightly rate. Perhaps a few nights for a honeymoon and then I would move on to something that has a better value.‚Äù entropy430 said, ‚ÄúI couldn't help but notice how they highlighted the most expensive bungalow in all of Bora Bora. Most of the bungalows in Bora Bora go for about $600-$800 a night. Still a chunk of money, but nothing like $2,700 a night.‚Äù

And a few others offered more affordable alternatives:

iBabble said, ‚ÄúBeautiful...turns out one of the most affordable places to stay in Bermuda is 9beaches...cool tents right over the water...really enjoyed our stay there!‚Äù siracco said, ‚ÄúYou can get 'over water huts' in Roatan, Honduras at Anthony's Key for a whole lot less. And Americans can save on air fare as well.‚Äù Jess2010Jess said, ‚ÄúI LOVE that somebody on here knows and mentioned the Bay Islands! Such a wonderful, little-known gem. Cheap and beautiful. And great sea food and snorkling.‚Äù hondo99 said, ‚ÄúPearl Farm, near Davao in the Southern Philippines, has some really cute huts over a coral reef. You can sit on your back porch and watch the multicolored tropical fish swim by. A truly beautiful place and far more affordable than some of the others listed.‚Äù

Former House Speaker Newt Gingrich announced his presidential candidacy Wednesday afternoon, saying that he likely will run on a platform that includes overturning health care reform and eliminating the EPA.

CNN.com readers of all stripes and perspectives responded with overwhelming opposition to Gingrich. Some opposed his political philosophies, while others thought allegations about his personal life made him too controversial a figure. The comments that follow are a representation of responses to this story; take a look at this sampling, and let us know in the comments area of this post if you agree with them, or if you support Gingrich.

blue175 said, ‚ÄúThe republican presidential field is comparable to the bar scene in Star Wars.‚Äù Cininor said, ‚ÄúWow! I couldn't have said it better if I were Luke Skywalker.‚Äù DeafandDumb1 said, ‚ÄúMore like Spaceballs.‚Äù barneyfff said, ‚ÄúIt's a sad state of affairs for the Republicans: Gingrich, Palin, Trump...A smorgasbord of idiocy.‚Äù SuperChunk77 said, ‚ÄúSo it's Palin, Donald Trump and this guy. They should call Dan Quayle and get him to run again. Dick Cheney can't run because he was already President for eight years.‚Äù Indyswim6671 said, ‚ÄúGOP Clown Car!‚Äù gravis said, ‚ÄúGood grief. Next we'll be hearing Karl Rove is entering the race. Does this parade of fools ever end?‚Äù cessnaflyer said, ‚ÄúIt is sad that the Repubs cannot come up with a decent candidate. I miss IKE.‚Äù

More seriously, readers took issue with Gingrich‚Äôs policies and his past:

nzgrrj said, ‚ÄúMy patriotism inspires me to call him a philandering blow hard.‚Äù JohnCBarcIov said, ‚ÄúReally? I'm a Republican, and I wouldn't vote for this guy. He's a parody of everything that's wrong with the Republican Party - a rich, smug, two-faced liar and habitual adulterer who doesn't care about ANYTHING other than power.‚Äù tipsana said, ‚ÄúSorry pal. I remember. I remember your hypocrisy in impeaching Clinton for Monica while carrying on your own affair. I remember you asked your dying wife for a divorce so you could marry your latest honey. I EVEN remember how tacky you were to register for wedding gifts for your THIRD marriage. And finally, I remember how much your 'Contract with America' was really only for the benefit of wealthy, white, America. No way would I support you for any office.‚Äù

Are Americans a simple people?

CNN.com business producer, Kevin Voight‚Äôs Business 360 post featured comments made by China's Vice-Premier Wang Qishan when he appeared Monday on "The Charlie Rose Show.‚Äù When the vice premier was asked ‚Äúwhat misperceptions the American public has about China‚Äù he said, among other things, that ‚ÄúAmerican people, they‚Äôre very simple people.‚Äù

Zoglet said, ‚Äú"Simple" is appropriate for a nation that has replaced critical analysis of its own government with blind, flag-waving patriotism.‚Äù Bullrich said, ‚ÄúIt is hard to think of Americans as culturally apt when you see that American culture is shaped by celebrities instead of ideas.‚Äù Reiner said, ‚ÄúCome on, at least Ms Palin knows where Africa is.‚Äù Pamela said, ‚ÄúI love visiting America and I am fascinated with the people when I am there, however I do find a severe lack of social awareness and lack of general knowledge among Americans to be honest.‚Äù Jen said, ‚ÄúI think that Americans have a very narrow view of the world and this can be the ‚Äòsimple‚Äô he was talking about. I am American and currently living in Italy, I have lived all over the world since I was a child and when it comes to my own country I find that the people are very much stuck in their views.‚Äù

But Bill in Slidell said, ‚ÄúScrew China. That simple enough for you?‚Äù Scott Jacobs said, ‚ÄúI will put an American businessman up against a Chinese businessman any day of the week.‚Äù Jim said, ‚ÄúI don‚Äôt think so. America has a very diverse culture because of how it was formed. People come from all over the world to live here and it gives us a wider world view. Also in America, learning about other cultures is sometimes as easy as walking out your door.‚Äù

1:01 am ET September 26, 2021 RETWEET
Two amateur free divers have found one of the largest collections of Roman coins in Europe off the east coast of Sp‚Ätwitter.com/i/web/status/1‚Ä¶EZ
cnni

12:31 am ET September 26, 2021 RETWEET
A black truck with the name of a funeral home on it brought a stark and unexpected message to downtown Charlotte la‚Ätwitter.com/i/web/status/1‚Ä¶47
cnni

12:01 am ET September 26, 2021 RETWEET
A violin-shaped church, an "upside down" house and a hotel modeled on a Russian doll are among the entries in an an‚Ätwitter.com/i/web/status/1‚Ä¶la
cnni

11:31 pm ET September 25, 2021 RETWEET
Two Japanese sisters have been confirmed as the world's oldest living identical twins and the oldest ever identical‚Ätwitter.com/i/web/status/1‚Ä¶4H
cnni