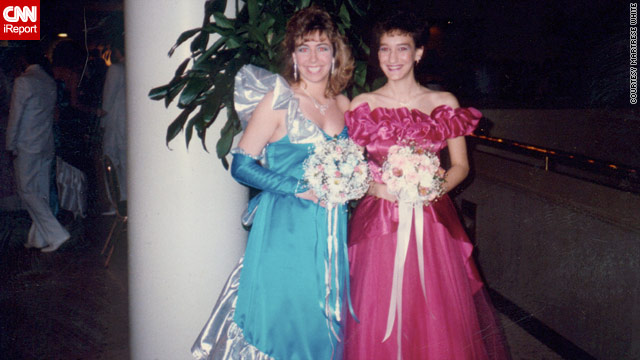 iReporter Martrese White, left, shared her prom picture. She came up with the design for the dress and crafted her accessories.
May 12th, 2011
11:38 AM ET

It's that time of year again - the annual high school rite of passage know as prom season. That means crafty dresses, unusual dates, creative proposals and questionable fashions that are sure to haunt you in a decade. So get into the prom spirit; check out these prom antics and share your prom pictures.

Prom proposal gone wrong – What began as a thoughtful gesture ended in a prom ban. When a student presented his prom proposal by writing it out on a school building, his date was flattered, but the administration wasn‚Äôt amused. It banned him from the dance.

I'm too sexy for my prom – This may not be the skimpiest prom dress ever, but it was racy enough to get a senior escorted from her prom in handcuffs.

The real senior prom – A boy decides to take his 95-year-old great-grandmother to his prom because she had never attended one before.

1:32 pm ET April 11, 2021 RETWEET
RT @CNNSotu: CNN‚Äô@jaketapperer on the legacy of the Civil War 160 years after it began: "In some parts of the country and in the hearts and‚Ä¶
sarasidnerCNN