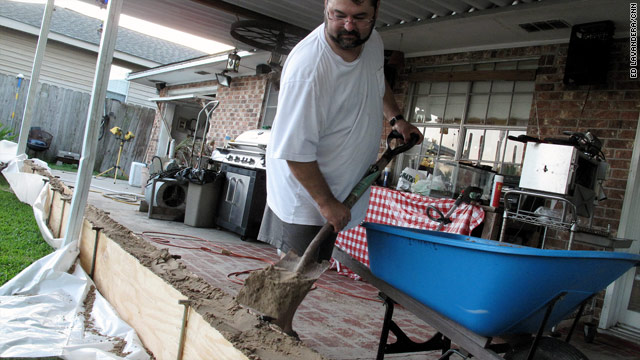 Gerald Gaudat builds a makeshift levee wall around his home in Stephenville, Louisiana.
May 12th, 2011
06:55 AM ET

Louisiana flooding - The state is bracing for the worst flooding it has seen in decades. Gov. Bobby Jindal told residents in the southeastern part of the state that they should leave their homes ahead of the anticipated opening of a spillway designed to divert the impending crest around the Crescent City. The U.S. Army Corps of Engineers will open the Morganza Spillway and send a torrent of water down the Atchafalaya River, Jindal said. The people are banding together, and trying to get through the disaster as they have in the past. The Corps predicts the opening threshold will be reached sometime between Saturday and Tuesday.The floodwaters that have inundated tens of thousands of acres of Missouri farmland and lapped at downtown Memphis, Tennessee, are now on a steady, soggy march through Arkansas, Mississippi and Louisiana. Look at photos of the flooding and learn about what is causing it and how engineers are trying to mitigate it. Are you there? Tell CNN.com's Open Story about your experience.

Japan nuclear reactor –A low water level in a reactor building at the damaged Fukushima Daiichi nuclear power plant in Japan may have exposed fuel rods and caused them to melt, the owner of the facility says. Tokyo Electric Power Co. blamed the incident on a faulty gauge that monitors the water level in the pressure vessel in the No. 1 reactor building. Once the gauge was reset, workers discovered Thursday that the water level had dropped more than three feet (1 meter) below the fuel rods that need to be cooled by water to keep them from melting. The earthquake and tsunami in March in Japan has devastated the country.

Congress sees bin Laden pics - More members of Congress are seeing photos of Osama bin Laden's corpse. Republican Sen. James Inhofe told CNN that he saw about 15 photos of bin Laden's body. Most images were taken in the Pakistani compound where the al Qaeda leader was killed and three photos were taken on a naval vessel from which bin Laden was buried at sea after the May 2 U.S. commando raid. "Pretty gruesome," Inhofe said.

Peace Corps rapes - Several former Peace Corps volunteers say they were raped during their assignments overseas. Director Aaron Williams says the agency's culture of "blaming the victim" has to end. More than 1,000 sexual assaults have been reported since the year 2000.

By the end of March, 1 in 7 New York adults had Covid-19 â€” about 10 times higher than the official account, accorditwitter.com/i/web/status/1â€¦HhfW
cnni

7:30 pm ET May 29, 2020 RETWEET
â€œIt is the right move to do for the time being, for the next couple of days, until we can regain control of the strtwitter.com/i/web/status/1â€¦knwr
cnni