Spain boosts security as prime minister targeted in a series of letter bombs, including one that exploded at Madridātwitter.com/i/web/status/1ā¦Ky

RT @CNN: US stocks exploded higher Wednesday. The Dow is now more than 20% above its 52-week low, which puts it in a new bull market. Theā¦ 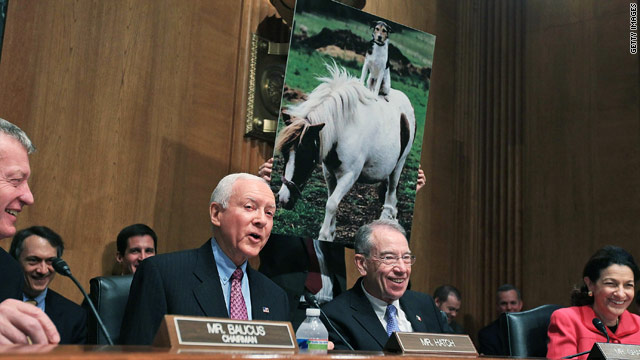 "Why is everyone unhappy? You all voted these oil drenched Repubs into office, didn't you? Don't complain now. There is always a price to pay for failing to heed the 'fool me once' warning. Pay up and shut your mouths. Fill that big ole tank up and just smile."- john1450

Saying they could not control rising prices at the pump, oil company executives fought a Senate bill to eliminate tax breaks for the "big five" oil and gas companies. Savings from the bill would be used to pay down the deficit. Executives admitted the tax breaks were not needed for exploration but said the subsidies are similar to those enjoyed by other industries.

Many CNN.com readers were outraged that oil executives would fight the proposed bill. Others expressed anxiety that oil companies would merely pass on any additional costs to Americans at the gas pumps. And some supported the oil companies.

Brian222 said, "I am amazed by both the sense of entitlement and the complete disconnect of CEOs. No one owes you a profit nor a bonus and there is no reason to use tax payer dollars to increase your already large profit margins." AZJames replied, "The dollars they are using are their own dollars. The subsidies they are using just allow them to offset their costs with profits. It reduces the amount of tax money they pay. No different that any other manufacturer still left in the USA."

Haroldwolf said, "Congress will never fix the problem. They are too much in the pocket of the oil lobby. This hearing is a dog and pony show." am8canpops said, "You ain't seen nothin' yet. Wait until the elections of 2012. Our learned Supreme Court judges just gave big corporations including Big Oil the means to buy the next election. I thought these learned judges were apolitical. Guess I was wrong."

Change begins at the gas pump, wrote many readers. Zfrost said, "The government might not be able to control them but we can. Pick one day, two days, three days a month repeatedly and boycott gas stations. Do whatever you can to lessen your gas consumption. Big Oil will get the message." Guest, a "local American Mechanical Engineer" agreed. "Electric car. Solar panel on roof. Battery charges car at night. Done, no more gas needed. Use the hybrid to go far if need be. Bet they won't like that."

k382 said, "Inflated gas prices are the ball and chain of the economy. Back in the Depression, cheap gas prices fueled the growth of this country. America was empowered to build dams, bridges, skyscrapers, and businesses. Today we need an alternative energy fuel for vehicles. Gas prices will never be reasonable again. We have to start rebuilding America and the future with total electric vehicles."

goatfish86 said "If you don't like Big Oil, then don't buy it. And if not doing so wrecks your economy, then you were pretty foolish for basing your economy on a substance that does not replenish and is found chiefly in countries that despise the way you do business. If you are angry with Big Oil, then keep in mind that you are the ones who created it."

John Demjanjuk, 91, has been found guilty of accessory to mass murder as a guard in Sobibor, Poland. After decades spent fighting accusations that he was a Nazi camp guard, Demjanjuk changed his line of defense when the Munich trial opened 18 months ago, arguing that as a prisoner of war he was forced to obey the Nazis.

Some CNN.com readers thought his sentence,Ā five years in prison, was unnecessary, given his age and previous imprisonment. FlyBoy2 said, "As bad as it was for the Jews in the 40's during WWII, there is nothing anyone can do to turn back the hands of time. Is prosecuting a 91-year-old who had a long life really going to do anything?" Dav91 asked, "Would a 100-year sentence have been better? He is 91 for heaven's sake."

GM1966 asked, "Are you saying that if you are a criminal and reach a certain age then you shouldn't be held accountable? Are you wanting an age limit for prosecution?" soporifix said, "There's no statute of limitations on murder." allmosttoast said, "Five years for helping to kill 27,900 people. About 5,580 people dead for each year in prison. A slap on his wrist. That's an insult."

The story had some readers discussing whether Demjanjuk's defense was valid and what is required of U.S. soldiers. rozarlive said, "He was a soldier following orders: either follow orders or be executed. If a U.S. soldier doesn't follow orders, he gets court marshaled and rots in prison for a long time. soporifix replied, "He was a POW chosen specifically because he was good guard material. He wasn't a soldier following orders from superiors."

roaderik60505 said, "So I can tell our military commanders 'no' to something? Not how it works." RdclCntrst replied, "Yes, you can. Under the Uniform Code of Military Justice, soldiers are expected to refuse any illegal orders. 'I was just following orders' is specifically NOT a defense in an American military court. I know this because I am an American soldier and infantryman. If you're also in the American military, you should know this too."

In a remote area of Kenya, a Samburu tribe male is allowed to rape a girl of his family by draping a necklace over her in the presence of her parents. "Effectively he has booked her," says Kulea, an activist and member of the Samburu herself. Pregnancy from this is both prohibited and not prevented, often resulting in infanticide and infection.

Most people who left comments on the storyĀ agreed with Guest, who said, "I just wanted to cry when I read this story. How awful, girls as young as 6 beaded! Why not call it what it is: a pedophile state. How disturbing."

Some readers said it was unfair that the whole of Kenya was identified with the practice. WBMD said, "This is terrible reporting. Presenting one small tribe's practices as a Kenyan 'tradition.' "Ā Kivu said, "Less than 1% of Kenyans are Samburu, so this hardly makes Kenya a 'pedophile state.' Do you think the U.S. is a polygamous, pedophile state because of extremist Mormons making up a fraction of the population?" robacek said, "When I lived in Utah, every second woman I met revealed being raped by a male relative (usually her father) back when she was a child. How is that any situation any different from Kenya? We have sick, perverted sub-cultures right here in the US..."

swap42 said, "I've been to Kenya and most of their traditions are not this degree of wrong. I guess the news media likes to highlight the most extreme stories." jenst said, "It's still very important to shine a light on any situation like this, no matter how isolated. You can bet that any child would be glad for that."

One passenger was killed and four injured when a ārogue waveā hit their cruise ship during a storm earlier this wtwitter.com/i/web/status/1ā¦KW4Ki0
cnni

10:30 am ET December 3, 2022 RETWEET
The knockout round of the World Cup starts now. The US faces off against the Netherlands in a do-or-die match. Follātwitter.com/i/web/status/1ā¦KF
cnni

One passenger was killed and four injured when a ārogue waveā hit their cruise ship during a storm earlier this wtwitter.com/i/web/status/1ā¦KW4Ki0
cnni

10:30 am ET December 3, 2022 RETWEET
The knockout round of the World Cup starts now. The US faces off against the Netherlands in a do-or-die match. Follātwitter.com/i/web/status/1ā¦KF
cnni

A man has been arrested and charged with murder in connection to the killing of Migos rapper Takeoff, the Houston Pātwitter.com/i/web/status/1ā¦Hy
cnnbrk

9:54 am ET December 2, 2022 RETWEET
An appeals court has halted the special master review of documents seized from Mar-a-Lago, in a major defeat for foātwitter.com/i/web/status/1ā¦Ld
cnnbrk