A presumptive case of coronavirus in Oregon is thought to be the third in the US from community transmission, but tâ€twitter.com/i/web/status/1â€¦Uw

A case of coronavirus in California is the second in the US of unknown origin, health officials sayâ€twitter.com/i/web/status/1â€¦Nu

President Trump says he will nominate Rep. John Ratcliffe to be director of national intelligenceâ€twitter.com/i/web/status/1â€¦33

An appeals court blocked the Trump administration from sending asylum seekers to Mexico to wait for their immigratiâ€twitter.com/i/web/status/1â€¦rY

Bernie Sanders holds substantial leads in the two largest states to vote in next week's Super Tuesday, according toâ€twitter.com/i/web/status/1â€¦OF

The Dow opened 750 points down, marking its seventh-straight day in the red as coronavirus fears continue to mountâ€twitter.com/i/web/status/1â€¦sr 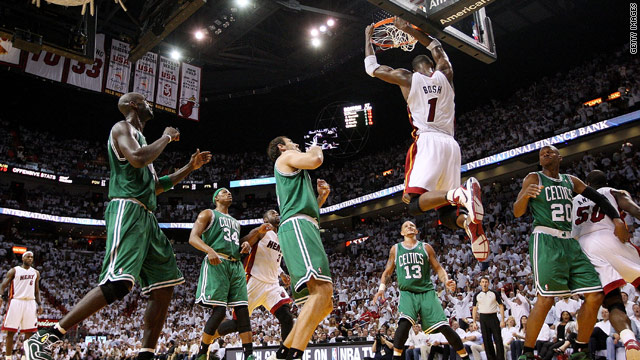 The Celtics weren't going down without a fight but the boys from Boston could do little in the final minutes of Game 5 to stave off a 10-point run by LeBron James. The Celtics were sent packing in a 97-87 loss. But was the Heat's commanding victory more a result of Miami's skill or Boston's bad luck? SI.com's Ian Thomsen writes that blaming the Heat's win on an injury-riddled Celtics squad would do a disservice to both teams. "Had Rondo been healthy, would the Celtics be looking forward to a Game 6 at home?" Thomsen writes. "It is neither an excuse the Celtics were offering nor one that is fair to the Heat, who come together in a short time with teammates who struggled to complement one another. The Celtics didn't collapse at the sight of them, or the sight of their own injury report. Their stubbornness gave meaning to Miami's victory."

While Doc Rivers' squad may join the powerhouse Lakers and Spurs on the sidelines for the remainder of the NBA playoffs, speculation is heating up about who the Heat has moved to the forefront.

Chicago Bulls vs. Atlanta Hawks - The Bulls will take the court at Philips Arena for their Game 6 showdown with the Atlanta Hawks. Chicago leads the series 3-2.

$1 million - Fine received by the Fiesta Bowl in the aftermath of a recent scandal involving apparently illegal campaign contributions from various staffers and inappropriate spending by the former CEO.

3 - Number of races Daytona 500 champ Trevor Bayne has missed after an unknown illness sidelined him. Bayne is expected to return May 22 at the Nationwide Series' race in Iowa.

56 - Number of regular season games won by the Boston Celtics. Coach Doc Rivers recently said that he "probably" will return to coach Boston again next season.

The best protection against coronavirus is washing your hands -- but you have to do it properly: ðŸš¿ Wet your handtwitter.com/i/web/status/1â€¦VshuB
cnni

1:01 am ET February 29, 2020 RETWEET
Clearview AI has been suspended from Apple's developer program for flouting its policies, the latest controversy toâ€twitter.com/i/web/status/1â€¦8T
cnni

12:31 am ET February 29, 2020 RETWEET
Lucy the Elephant, the New Jersey-based attraction whose claim to fame is being the world's largest elephant and thâ€twitter.com/i/web/status/1â€¦xj
cnni

12:23 am ET February 29, 2020 RETWEET
Although physicians still have no vaccine or cure for the novel coronavirus, health officials and pharmaceutical coâ€twitter.com/i/web/status/1â€¦P6
cnni