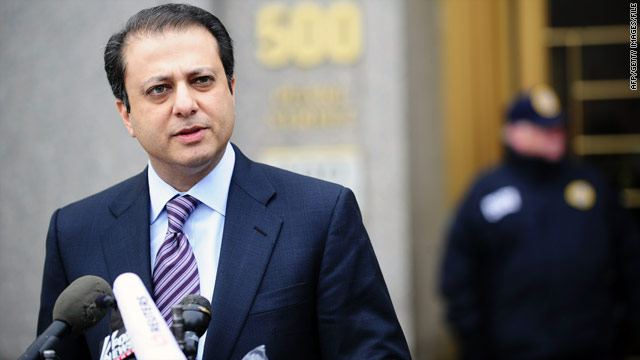 U.S. Attorney Preet Bharara won the conviction of a Wall Street hedge fund manager this week.
May 12th, 2011
10:46 AM ET

The U.S. attorney for the Southern District of New York announced Wednesday that a jury had found billionaire hedge fund manager Raj Rajaratnam guilty of conspiracy and securities fraud in one of the most high-profile insider trading prosecutions in a decade. Known for his tough campaign against insider trading, Bharara once worked for Democratic Sen. Charles Schumer of New York.

When she receives her college diploma later this month, the Harvard University student of Native American descent will be the first Wampanoag to graduate from the school since 1665. Smalley will join two of her ancestors, Joel Iacommes and Caleb Cheeshahteaumuck, the sons of Wampanoag tribal leaders who entered Harvard in 1661. At this year's commencement ceremony, the university will grant a posthumous degree to Iacommes, who was killed in a shipwreck just before graduation. Almost 350 years later, Smalley will accept the diploma on his behalf.

The 30-year-old engineer from upstate New York is accused of stealing handcuffs in Dubai and has been detained there for four months. Foster went to the United Arab Emirates in January on a business trip. He was arrested after reportedly keeping a pair of handcuffs that he found on the ground. According to Foster's Facebook page, he was whipped, beaten and forced to confess to stealing handcuffs from police. He now faces two to seven years in prison in the UAE.

While the number of children who tested positive for Covid-19 declined slightly, children made up a greater percentâ€twitter.com/i/web/status/1â€¦Yo
cnni

7:49 pm ET September 27, 2021 RETWEET
The Santa Ana winds will be increasing for Southern California this week. This could mean more fires for the southeâ€twitter.com/i/web/status/1â€¦Ye
CNNweather

7:36 pm ET September 27, 2021 RETWEET
"While this verdict is not a turning point, it can be a galvanizing moment for those who want to join the fight toâ€twitter.com/i/web/status/1â€¦R9
cnni