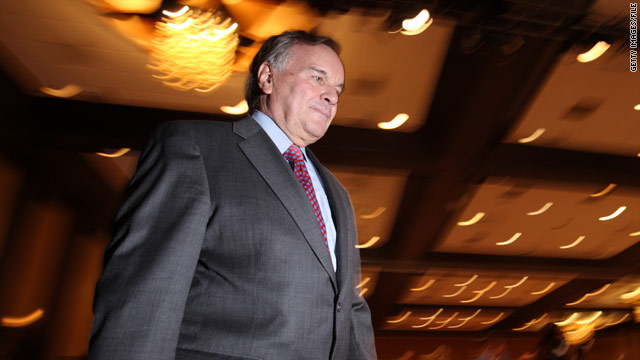 For about 44 of the past 55 years, a man named Richard Daley has been mayor of Chicago. Richard J. Daley was mayor for more than two decades. And his son, Richard M. Daley, is now stepping down after 22 years in office. He’ll be succeeded Monday by former White House Chief of Staff Rahm Emanuel.

A new book by Neil Steinberg about the Daley legacy has been published with excerpts appearing in the Chicago Sun-Times. The Daleys have their political finesse and Democratic Party ties. More offbeat, Steinberg said, is the Daleys' "genius for mangling the English language.”

“There are even crooked reporters,” the first Daley said when faced with a police scandal, “and I can spit on some of them right here!” “Scrutiny?” the second Daley said about news coverage of his brother. “What else do you want? Do you want to take my shorts? Give me a break, go scrutinize yourself. I get scrootened every day, don’t worry, from each and every one of you. It doesn’t bother me.”

He overcame the death of his musician father, poverty, Tourette’s syndrome and substantial autism to rise to the top four finalists on “American Idol.” Yet Durbin’s flamboyant rock 'n' roll performances were not enough to spare him Idol’s hook Thursday night.

Durbin was eliminated in a shocker determined by 72 million votes. He finished the evening with a powerful version of Paul McCartney’s “Maybe I’m Amazed.” It was a tribute to his wife, the mother of his young song, who supported Durbin in his pre-Idol days by placing Post-it Notes throughout their house that said “Embrace Your Gift.”

She was denied air travel by Korean Air because the airline feared the terminally ill cancer patient would die on board a flight, according to affiliate KING.

On Thursday, after five days of waiting, Kim headed back to her homeland of South Korea, flying first class on Delta Air Lines with her daughter. The two flew first to Japan, then on to South Korea, where Kim hopes to live out her final days.

The two-time world champion track cyclist launches his professional road-racing career Sunday as analysts project that he will be America’s next — scandal-free — road-racing sensation. According to a profile in this month’s Outside magazine, the 20-year-old has the genes, and perhaps the smarts, to overcome Lance Armstrong’s illustrious, if now tattered, legacy.

“Mini Phinney,” who is 6-4, is the son of Olympic stars Davis Phinney and Connie Carpenter. Davis, now battling Parkinson’s disease, was the first American to win a Tour de France stage in 1986. Meanwhile, Carpenter was an Olympic speed skater who won a gold medal in cycling in the 1984 Los Angeles Games. Since Taylor Phinney began track racing five years ago, he’s earned two world titles, a national title and an Olympic berth.

Even more impressive is how he has quietly distanced himself from road cycling’s controversies. Though he was hand-picked by Lance Armstrong to lead Armstrong’s Trek-Livestrong Under 23 team, this past September, Phinney quietly moved from Armstrong’s Team RadioShack to sign a three-year deal with the BMC cycling team.