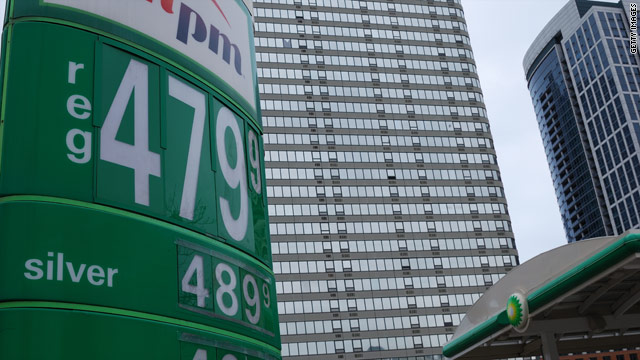 Gas prices: The national average price of a gallon of regular gas dropped two-tenths of a cent overnight to $3.982, according to the AAA Daily Fuel Gauge Report.

The average price is virtually unchanged from a week ago and is about 13 cents below the record average price of $4.114, recorded on July 17, 2008.

"When we've had floodwaters in this part of Louisiana before, it has closed up to 12 refineries," Peter Beutel, an analyst with energy risk management firm Cameron Hanover, told CNNMoney. "The fear here is that we could see refineries close again." Beutel was referring to the impact of Hurricane Katrina in 2005.

How much of your paycheck is going to pay for gas? Check out CNNMoney's state-by-state look.

Town waits for flood: The small town of Butte La Rose, Louisiana, is waiting to learn if the Army Corps of Engineers will open the Morganza Spillway to let waters from the swollen Mississippi River into the community of 800 homes.

Hundreds of people heard a dire prediction from Col. Ed Fleming of the Army Corps of Engineers at the town's firehouse.

"I'm telling you the depth of water from right here will be 15 feet," he told them.

Read what CNN's Ed Lavandera found in the Cajun community.

Nuclear accident compensation: Japan's government has announced that victims of the Fukushima Daiichi nuclear plant accident will be getting financial compensation.

Some analysts say total compensation could amount to more than 10 trillion yen ($124 billion).

More than 78,000 people have been displaced by the disaster. The plant's operator, Tokyo Electric Power, has made a down payment on compensation of 1 million yen (about $12,000) per household to some families.