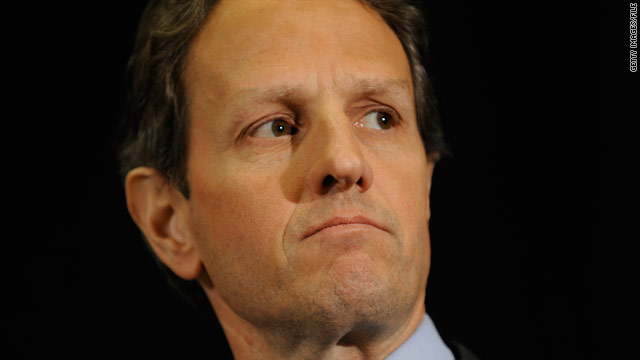 Treasury Secretary Timothy Geithner is charged with finding money to keep the government afloat until August.
May 16th, 2011
11:34 AM ET

The U.S. government hits its credit limit of $14.3 trillion Monday, and the U.S. Treasury secretary will begin scrambling to find cash to float the government until August 2. While budget negotiations are being led by Vice President Joseph Biden, Geithner estimates that at least $2 trillion is needed to keep the government running. NPR's Jacob Goldstein estimates that to balance the budget, taxes will have to be raised or spending will need to be cut. By itself, spending would need to be cut by 40 percent, which is equivalent to "every penny" of discretionary spending, including the defense budget, Goldstein said.

The Phoenix Suns owner revealed to The New York Times that he is gay and will appear exclusively on CNN‚Äôs ‚ÄúIn the Arena‚Äù on Tuesday evening. Welts, 58, who rose from ball boy to executive to team president, has already broken the news to NBA Commissioner David Stern, Hall of Famer and longtime friend Bill Russell and his star point guard Steve Nash. He wants to mentor gay people who have doubts about careers in sports, the Times reported.

The national security reporter and contributing editor to the Los Angeles Times magazine released a book Monday described as an uncensored history of America‚Äôs most secretive military base. The book, ‚ÄúArea 51,‚Äù was reviewed by The New York Times, which said Jacobsen finds the region located in Nevada‚Äôs remote southern desert is not so much about little green men. Rather, it is the testing ground for America‚Äôs weapons and espionage industries.

9:34 pm ET June 5, 2020 RETWEET
Two years after stepping away from his day-to-day duties at Reddit, cofounder Alexis Ohanian is resigning from the‚Ätwitter.com/i/web/status/1‚Ä¶0T
cnni

9:03 pm ET June 5, 2020 RETWEET
Universal Orlando Resort in Florida reopened to the public on Friday after closing in March because of the coronavi‚Ätwitter.com/i/web/status/1‚Ä¶6h
cnni