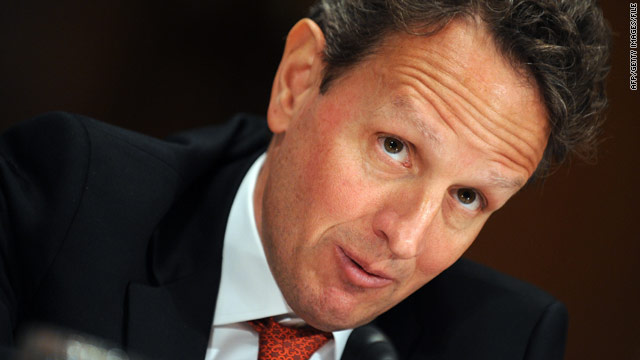 Treasury Secretary Tim Geithner has said he can prevent a federal default until August 2.
May 16th, 2011
07:04 AM ET

Debt ceiling: The federal government reaches its current debt ceiling of roughly $14.3 trillion on Monday, although Treasury Secretary Tim Geithner has indicated in a letter to Congress he can keep the country out of default until August 2.

Analysts warn that a failure to reach an agreement in time to avoid a national default could have devastating consequences. Among other things, Americans could be faced with skyrocketing interest rates and a plummeting dollar which could lead to a higher cost of living.

Republicans are pushing for spending cuts before agreeing to any plan to raise the debt ceiling.

Senate Minority Leader Mitch McConnell, speaking to CNN's Candy Crowley on Sunday, called on Congress to institute a spending ceiling for the next two years and also address discretionary and mandatory spending and entitlement reforms, including Medicare and Social Security.

He said a deal that receives a positive prognosis from credit rating agency Standard & Poor's would win his support.

Reid said deciding what to cut in the budget will not be easy but he maintained "all options are open."

Beaten Giants fan: Bryan Stow, the San Francisco Giants fan who was severely beaten outside Los Angeles' Dodger Stadium in late March, is set to be transferred Monday from Los Angeles to a San Francisco hospital, his physicians said Sunday.

Stow, 42, was taken out of a medically induced coma about a week ago, and has since shown signs of some cognitive function, Dr. Gabriel Zada said, including opening his eyes several times over the past week.

"Eye opening is a sign of higher cognitive function," Zada said, noting that Stow has done so in response to either verbal or physical stimulation.

Stow also has "some movement" in his arms and legs, Zada said.

The doctor cautioned, however, that Stow still has a long road of recovery ahead of him "that will require very intensive medical care."

"In a rapidly evolving virtual marketplace, where each cyber attack costs small and medium sized businesses an average of nearly $200,000, business owners must vigilantly protect against information security risks that result in billions of dollars in lost revenue," the FCC said in announcing the meeting.

The event coincides with the annual National Small Business Week, which highlights the role small businesses and entrepreneurs play in the nation's economy.