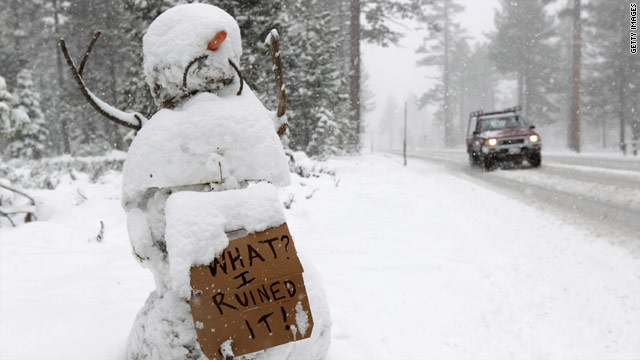 A snowman holds a sign along the route that would have been the first stage of the Amgen Tour of California cycling race.
May 16th, 2011
11:08 AM ET

A rare mid-May snowstorm forced organizers to cancel the first stage of the Amgen Tour of California cycling race on Sunday and move the start location of the second leg on Monday.

The beginning of the second stage Monday will now be in Nevada City, California, instead of Squaw Valley, organizers reported on their website.

The Amgen Tour of California is described as a Tour de France-type event and the largest cycling race in the country. The world's top cycling teams compete.

Officials changed the stage two start point after the snow forced the closure of the Donner Pass on Highway 80, the only exit from the High Sierra to California's Central Valley and a key section of the original stage two route, Cyclingnews.com reported.

Race organizers canceled the first stage of the tour on Sunday when the storm dumped up to 7 inches of snow over some parts of the Lake Tahoe and Truckee areas, the Union.com reported.

Cyclists weren't the only ones with weather-related headaches.

About 1,800 Pacific Gas and Electric customers lost power on Sunday, the Union.com reported.

The area could see more snow down to the 2,400-foot level Monday night into Tuesday, Kathy Hoxie, a forecaster with the National Weather Service in Sacramento, told the Union.

To the west, even the Bay Area saw snow from Sunday's storm. About three-quarters of an inch covered the top of 4,200-foot Mount Hamilton, the San Francisco Chronicle reported.

"It was too much. But I was not going to let him take something I've worked for since I was six years old." Four-tâ€twitter.com/i/web/status/1â€¦9X
cnni

12:01 pm ET September 28, 2021 RETWEET
Sixteen people have been injured -- including four critically -- after an explosion led to a large fire in an apartâ€twitter.com/i/web/status/1â€¦qj
cnni