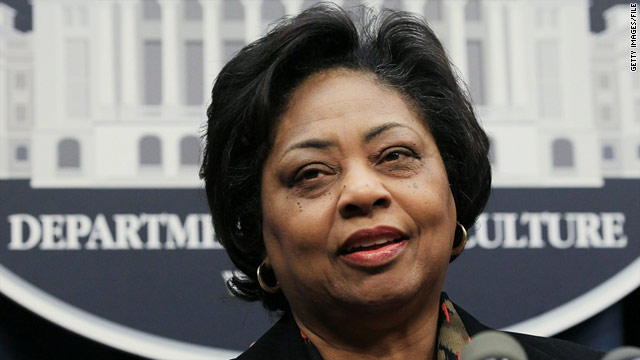 Shirley Sherrod speaks at a press conference last August at the Department of Agriculture.
May 16th, 2011
03:48 PM ET

Shirley Sherrod, who made headlines last summer when she was forced to resign her job with the Department of Agriculture after incomplete video footage of a speech she gave was posted online, may yet work with the agency again.

A spokesman for the USDA said Monday that Sherrod’s community organization, Southwest Georgia Project For Community Education, will be one of three groups chosen to work with the agency on civil rights issues.

“We anticipate that Mrs. Sherrod herself will be involved in working with the Department through the Southwest Georgia Project on a contractual basis through one of USDA’s programs that promote outreach and diversity,” Justin DeJong, spokesman for the USDA, said in an e-mail to CNN.

Sherrod, the department's director of rural development for Georgia, resigned under pressure last July after conservative blogger Andrew Breitbart posted a portion of a speech Sherrod gave online. In that video footage, which was heavily edited and incomplete, she seemed to suggest that she did not offer her full help to a white farmer.

Sherrod later received an apology and a job offer from USDA Secretary Tom Vilsack, which she turned down, saying at the time that she wanted to work in some capacity on racial issues affecting America.

In an interview with CNN last fall, Sherrod said her rejection of the job offer was not because she didn't want to work, but she needed time to sort out her next course.

"When you look at everything that has happened in the last four or five weeks, it makes it difficult to go back to that position," she said. "I feel at this time I could do more to address issues not as a full-time employee of USDA."

The extent of Sherrod's hands-on involvement with the USDA remains to be negotiated, Dejong said. "Conversations with Mrs. Sherrod have been positive and are ongoing."