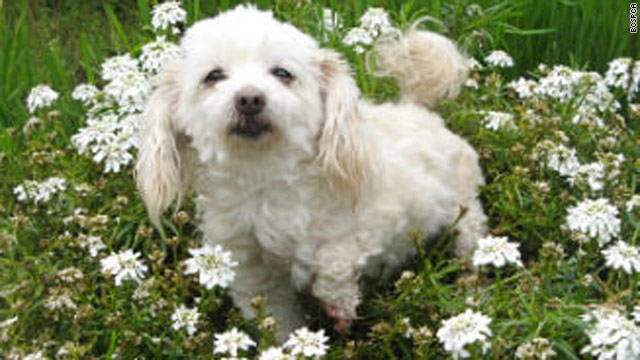 May plopped onto the grounds of a British Columbia nursing home May 2. The nurses at Shorncliffe Nursing Home in Sechelt found the creature in very poor condition, with deep gouges on her back and multiple broken ribs, according to the British Columbia Society for the Prevention of Cruelty to Animals.Â The deep gouges told rescuers how she got there: clutched in the talons of a bird of prey. The dog had no identification and other maladies that led rescuers to believe she was a stray.

â€śIn addition to the claw marks on her back and the broken ribs she sustained from the fall, all of her nails were so long they had grown into her paw pads and her teeth were badly decayed. We donâ€™t know how long she had been wandering without care, but she was obviously very neglected. Itâ€™s ironic, but this bird may have saved her life,â€ť Shannon Broderick, branch manager of the Sunshine Coast branch of the BCSPCA, said on the organization's website.

â€śItâ€™s an absolute miracle that she survived, and we want to do everything we can to help her,â€ť Broderick said.