Olympians McKayla Maroney and Simone Biles rip the FBI and Justice Department in Senate hearing on the botched inve‚Ätwitter.com/i/web/status/1‚Ä¶I9

Authorities have charged a man in the shooting of South Carolina lawyer Alex Murdaugh in what they allege was a con‚Ätwitter.com/i/web/status/1‚Ä¶wL 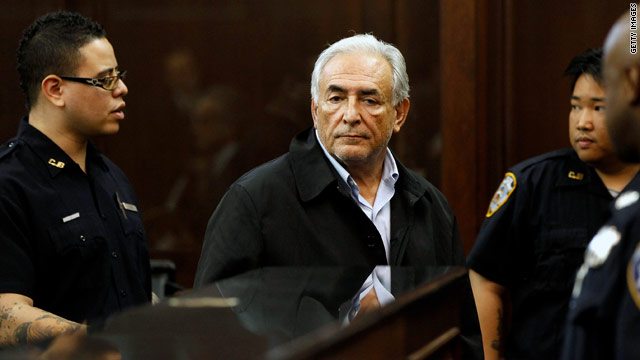 Dominique Strauss-Kahn: What's next for the jailed French presidential hopeful?

For the head of the powerful International Monetary Fund, and presumptive front-runner for the presidency of France, the next few days and weeks likely will bring dramatic change and impact his life both professionally and personally.

Dominique Strauss-Kahn, who had been scheduled to have talks with German Chancellor Angela Merkel and was preparing to be a leading figure in sessions addressing economic crises in Greece, Portugal and Ireland before his arrest, will now be somewhere very different: in an 11-by-13-foot cell at New York's Rikers Island jail complex.

He's a man known for his economic prowess, but also as "a great seducer" - a politician whose relationships with women have landed him in trouble.

And as he sits in jail, instead of preparing to lead France's Socialist Party against Nicolas Sarkozy next year, he will be defending himself against charges of attempted rape, unlawful imprisonment, forcible touching and sexual abuse.

The man known for helping bail out desperate countries in need of cash allegedly spent $3,000 a night for a luxury suite where he is accused of chasing¬Ýa housekeeping employee down a hallway and sexually assaulting her. Read the criminal complaint (contains graphic language) (PDF)

With court appearances on the horizon, CNN is taking a look at what's next for Strauss-Kahn and what the political, financial and legal ramifications will be.

Since there's a lot riding on the early stages of the investigation and arrest, Strauss-Kahn likely wanted the high-profile lawyer in his corner to help him with his defense and his image.

"Many of my clients are good people who have gone astray and broken the law," Brafman said in an interview with education website BabagaNewz.com.

Linda Fairstein, former head of the Manhattan District Attorney's Sex Crimes Unit, told CNN that as Strauss-Kahn sits in a jail cell, investigators will be examining evidence and talking to the woman who reported the allegation.

Fairstein said investigators will be looking at what the victim's emotional and physical condition was after the alleged crime was reported, any video tapes in the hotels to check on the victim and Strauss-Kahn's version of events and whether there were body fluids left behind to show proof of an assault. Much time will likely be spent interviewing the victim, Fairstein said, because "the case cannot proceed without her."

Fairstein spoke with TIME.com about how the case will proceed, what the charges against Strauss-Kahn mean and what is expected to unfold in the courtroom.

THE FUTURE OF A PRESIDENTIAL RUN

Strauss-Kahn's arrest dominated the front pages of France's newspapers, with most focusing on the likely damage to his political career - some calling for a timeout, others calling it game over.

TIME.com takes a look at whether the few minutes it took for the scandal to erupt could have killed Strauss-Kahn's hopes of a presidential bid and how as a result of the arrest the entire presidential race in France has been thrown into chaos.

But¬Ýsome in France also worry how the scandal may be portrayed.

"In the coming days, a flood of headlines and old clich√©s about French people being cowardly and depraved will probably come up," an article in French newsmagazine Le Nouvel Observateur and posted by TIME.com in English says.

WHAT SCANDAL MEANS FOR IMF AND GLOBAL ECONOMICS

"The biggest short-term impact of Strauss-Kahn's arrest will likely be felt in the euro zone," Michael Schuman wrote in a TIME.com piece. "Strauss-Kahn has been a key player in the often fractious attempts by Europe's leaders to resolve the zone's debt crisis, and his sudden absence will likely add more confusion to the debates over how to handle Greece."

But that's not to say that even if¬ÝStrauss-Kahn had been available there would have been an easy fix. And additionally, Schuman argues his absence raises more important "fundamental questions about that institution's role in the global economy."

Still the EU bailout is no doubt in some jeopardy, merely because of the arrest and what it means for who will be there to make things work, Fortune's Colin Barr writes.

Barr notes that with the head man sitting in jail, and the No. 2 man leaving in August, for the IMF the impact will definitely be in how it will lead moving forward and who it will trust to do so.

"The bigger impact of Saturday's alleged incident lies in the shift of economic leadership from the debt-soaked West to the emerging East ‚Äì an accelerating trend that is almost certain to manifest itself in who gets chosen to pick up the pieces left by Strauss-Kahn.

At least one million Nigerian children could miss school this year as the new term begins amid a rise in mass schoo‚Ätwitter.com/i/web/status/1‚Ä¶GQ
cnni

6:40 am ET September 16, 2021 RETWEET
Muhammad Ali was one of the titans of 20th century popular culture, and his life has sustained biographers, histori‚Ätwitter.com/i/web/status/1‚Ä¶6r
cnni

6:38 am ET September 16, 2021 RETWEET
A Jakarta court ruled the Indonesian government had failed to uphold citizens' right to clean air, in a landmark ju‚Ätwitter.com/i/web/status/1‚Ä¶wA
cnni