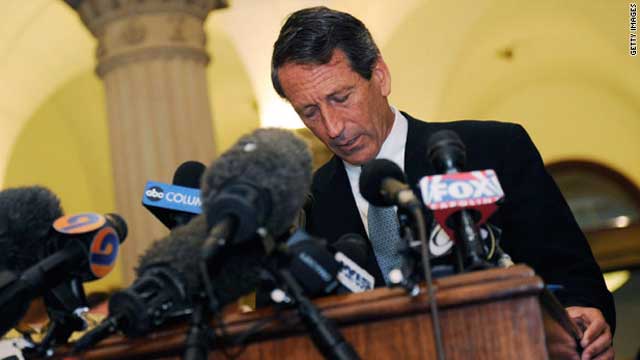 The admission, the apology, and subsequent request for forgiveness–we've heard them all before from politicians who've been caught with their pants down, the latest from Ex-California governor Arnold Schwarzenegger.  Here at Gotta Watch, we thought we'd bring back some of the most memorable public political sex scandals.

Hiking the love trail – Someone must have forgotten to tell South Carolina Gov. Mark Sanford that you can't get to Argentina from the Appalachian Trail. This so-called hike was Sanford's alibi for the trip he was actually taking to see his mistress in Argentina.

Strike a pose – Also leading the political cheater pack, is the affair between John Edwards and Rielle Hunter, who most recently did a controversial photo spread for GQ involving her daughter, fathered by Edwards.

Bathroom sting – Idaho Sen. Larry Craig was arrested in an airport bathroom in 2007 under suspicion of lewd conduct. This, coupled with the anger-fueled tapes of Craig after the incident, pretty much ended his career as a politician.

"I am a gay American" – Married father and then-New Jersey Gov. Jim McGreevey shocked the nation when he admitted not only was he gay, but that he also had an extramarital affair with a male staffer while in office. The 2004 scandal would end his political career, force him from office and make his "I am a gay American" soundbite part of the cultural lexicon.