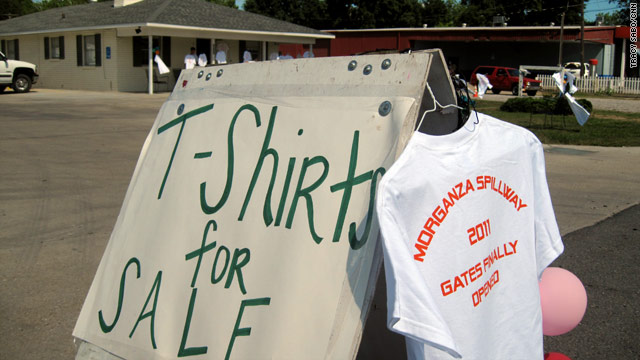 Heidi Fangue is selling commemorative shirts along the highway leading to the Morganza Spillway.
May 17th, 2011
11:53 AM ET

Since Louisiana’s Morganza Spillway gates were opened by the Army Corps of Engineers and began spewing massive amounts of water into the Atchafalaya River basin below, the massive concrete structure has become something of a local tourist attraction.

As the gates were first being opened to help relieve flooding pressure, I looked to my right to witness virtually every law enforcement official, Corps employee, construction worker and local resident present – each with a cell phone camera or iPhone in hand. That’s in addition to several dozen media outlets, like CNN, on hand for the big day. Every recording device was intently trained on the floodgates and the grand, awe-inspiring deluge now inundating a previously dry basin. I can’t tell you how many times I heard the phrase, “This is historic” flowing from the tongues of bystanders along the Morganza Spillway banks on Saturday.

The scene is like nothing seen here since 1973, when the floodgates were last opened to control the mighty Mississippi River’s rage.

The grand event was highly “produced” by the Army Corps, which controls the Morganza Spillway structure, complete with a dramatic live video feed beamed around the world, provided by the Department of Defense. Several local TV helicopters circled overhead as the gates were opened promptly at "1500 hours" as advertised. Louisiana state troopers officially closed the road for hours.

The event went off without a hitch. The excitement was palpable. The explosion of water out of the first opened bay did not disappoint. Fish were jumping, rabbits darting to safety, a gator swam through the open bay. Everyone was even allowed to walk onto the spillway to see the sights from above, once the Corps had deemed it safe for passage.

So, what’s left after all the hoopla? Certainly a ton of great video, pictures and memories for everyone who had a chance to see the 2011 opening of the Morganza Spillway floodgates. Go ahead, it’s okay to ask… what’s an event like this if there’s not a commemorative T-shirt?

That’s where Heidi Fangue comes in. Her temporary roadside T-shirt stand sits just down the road from the now internationally famous Morganza Spillway, along Louisiana Highway 1. Colored clusters of fading balloons were fighting against a strong wind, and white T-shirts with orange block letters reading “Morganza Spillway, 2011, Gates Finally Opened” were hanging up for sale. Many motorists honked their horns and waved as they passed.

“Very expensive,” she admits. “We’re kinda broke to be leaving, so we’re trying to raise money to help us evacuate if we have to.” Fangue speaks with a recognizable Louisiana accent and a sense of realism, both of which are qualities Louisianans seem to posses from birth.

Fangue and her brother live in Pointe Coupee Parish, where the spillway is located. Water is already on the rise, and both have their bags packed and camper loaded.

“We still don’t know if we’re gonna flood,” Fangue says nervously. “The locks ain’t even all the way open yet, so we’re not really sure what we’re going to do. … We’re ready to pull out as soon as we see the water coming."

As bad luck would have it, Fangue’s mother resides in Morgan City, Louisiana, which sits at the very bottom of the Morganza Spillway basin along the Gulf Coast. Floodwaters there are expected to reach 13 feet along the city’s seawall before they eventually mix with the Gulf of Mexico. The extended Fangue family there is already packing up.

It’s going to take a week or more to really know the full impact of the flood’s rage across Louisiana. Little is certain when your hopes are vested in Mother Nature and man-made levees. The “historic” reopening of floodgates of the Morganza Spillway is aimed at saving many in larger cities and their levee system - but simultaneously counterimpacts cities along the Morganza Spillway basin. There’s a lot of anxiety here along the floodwater’s newly directed route of destruction.

The first big “event” at the spillway, however, has officially come and gone. As with that historic event, all eyes remain focused on the water. And yes, the commemorative T-shirts are now for sale. However, they may come with a steep price - for both Heidi Fangue’s customers and perhaps her own family.