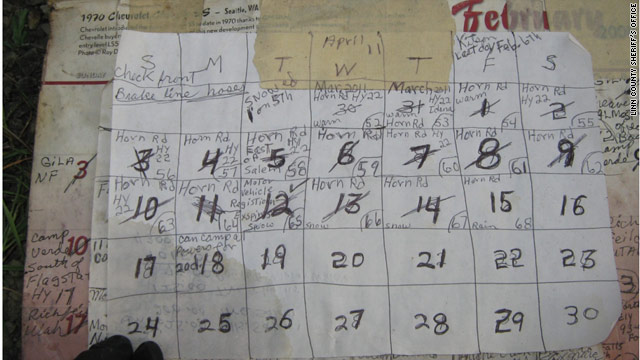 Jerry McDonald's last entry documenting the days he was stranded in Oregon's Cascade Range appears to have been made April 15.
May 17th, 2011
01:20 AM ET

A man who was found dead in a remote mountain area in Oregon apparently was stranded there for more than 60 days by heavy snow - information gleaned from brief notes he made on a homemade calendar, authorities said. 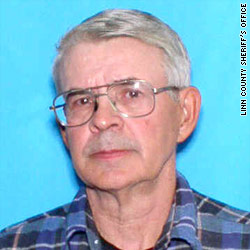 McDonald - who Mueller said was transient, estranged from his family and wasn't reported missing - arrived at the spot on February 7, according to a makeshift paper calendar that McDonald kept of his travels, the sheriff said.

He stayed there for the rest of the week, apparently to camp, with nothing noted on the calendar except his location - Horn Road - and a running count of the days he’d been there in corner of each day's box, as was his habit, Mueller said. But on the space for the 14th, McDonald wrote, "heavy snow," and "snowed in."

"He had too much snow to push out" with his four-wheel drive pickup, said Mueller, adding that the area, at an elevation of 4,000 feet, had been hit by "storm after storm" and likely would have been impassable.

From February 14 onward, McDonald would note most days’ weather conditions - including periods of more snow. He wrote "dig o." on Feb. 15-17. On March 2 were the words "trapped" and "snowed in on 14th."

A preliminary investigation and autopsy indicates McDonald's death was consistent with starvation and/or hypothermia, the sheriff's office said.

The pickup was drivable and had chains on all tires and a quarter of a tank of gasoline. Investigators said it appeared McDonald used a jack to put rocks under the tires in an attempt for traction, according to the office.

McDonald had a sleeping bag in the canopied rear of his pickup; cold-weather clothing and boots; buckets with which he apparently collected water; two rifles; and more than $5,000 cash, investigators said. He also built a small fire area.

He had no cell phone or GPS device. Investigators found no food or food containers, but McDonald may have burned food wrappers in a fire, Mueller said. The March 16-18 entries say "No Fo 1," "No Fo 2" and "No Fo 3," which Mueller says may indicate when McDonald ran out of food.

McDonald was only 3 miles from a state highway and 4 miles from a restaurant. Mueller said there may have been good reasons why McDonald didn’t walk away, but he can't be sure.

"He had the ability, unless he had some physical impairment we didn't pick up on," Mueller said. "When the snow gets to a certain depth, it gets hard to see where the road used to be. We'll never know if he attempted it, but he never noted anything (in the calendar) that he even tried."

McDonald's calendar had a couple April entries that weren't related to his predicament: "Motor vehicle registration expires" on the 12th and "can camp at Powers for 20 d." on the 18th. It's not clear whether he wrote those while he was stranded.

Though McDonald didn’t have a permanent home, the truck was registered in Unity, Oregon, the sheriff's department said.