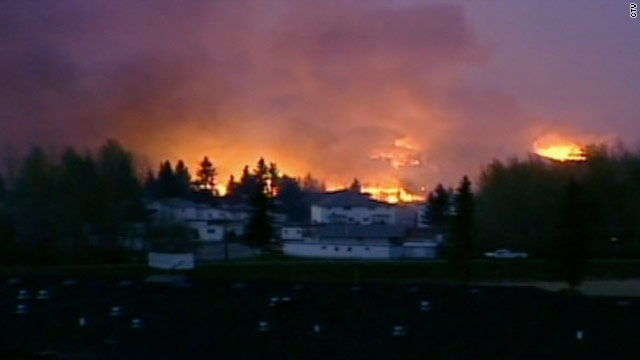 Town devastated, fires out of control in Alberta

Thousands of residents of Slave Lake, Alberta, were awaiting word Tuesday on when they could return to the town they fled two days earlier when wind-whipped wildfires tore through it, destroying hundreds of buildings.

At least 7,000 left the town, 155 miles northwest of Edmonton, when flames picked up Sunday afternoon, according to news reports.

No injuries have been reported. But more than a third of the town's residences had burned as well as the town hall, library and other government buildings, according to reports. Schools and the hospital survived, but essential services were damaged or knocked out. The provincial government said water in Slave Lake was not suitable for drinking or bathing until further notice.

The town's residents were scattered in shelters or with friends or relatives around the province. People in shelters were told they would not be allowed back into Slave Lake for three or four days, the Canadian Broadcasting Corp. reported.

Mayor Karina Pillay-Kinnee said her community was devastated, according to an Edmonton Journal report. "I've never seen anything like this before. It's going to take a while to rebuild our community," the Journal quoted her as saying. "It's heart-wrenching as people lose their homes, their livelihood."

The two fires that brought destruction to Slave Lake remained out of control late Monday, provincial officials reported. Around Alberta, there were 115 wildfires burning, with 36 of those out of control, the province said on its website.

The communities of Loon Lake and Chisolm were also under evacuation orders, and evacuation advisories were issued for other areas. About 2,000 oil workers were evacuated from sites north of Fort McMurray, according to the government.

More than 1,000 firefighters were battling the blazes, and reinforcements were on the way from outside Alberta, the government said.

Almost 415 square miles of Alberta had burned, the province reported.

The CBC said there was a possibility of rain for Alberta on Tuesday through Thursday, but it was unlikely to be heavy enough to have much of an effect on the fires.