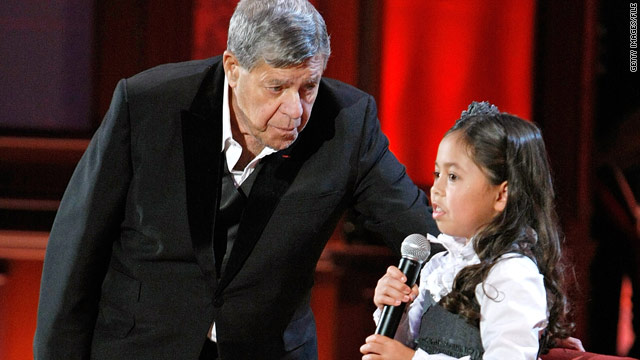 This year will be Jerry Lewis' last as host of the Muscular Dystrophy Association Labor Day Telethon.
May 17th, 2011
09:22 AM ET

The comedian and entertainer will make his final appearance as the host of the Muscular Dystrophy Association Labor Day Telethon. In a statement released on mdausa.org, Lewis said, "It's time for an all new Telethon era. This year's six hour prime-time telethon on September 4 will be spectacular, and I'm thrilled to be part of it." He'll continue on as National Chairman of MDA, a role he's held since the 1950s.

The Queens girl knows seven languages, plays six musical instruments and is learning tap and ballet in her home studio, all at the age of 5. Loiseau's parents told the New York Daily News that they spend $1,500 a week on tutors and lessons and that the young prodigy spends up to 7 hours a day in some type of instruction. Sunday is her off day. Loiseau, who grew up speaking French, Creole and English says Russian is her favorite language. "Honestly, I just want to open doors for my daughter," said Loiseau's mother, Esther. "She is really my princess."

The American-born wife of Dominique Strauss-Kahn released a statement saying, "I do not believe for one second the accusations brought against my husband. I have no doubt his innocence will be established." Sinclair is a journalist who quit her job as one of France's premier interviewers when Strauss-Kahn became France's finance minister. The Washington Post reports that the couple kept a low profile in the D.C. area, mostly socializing with family and close friends.