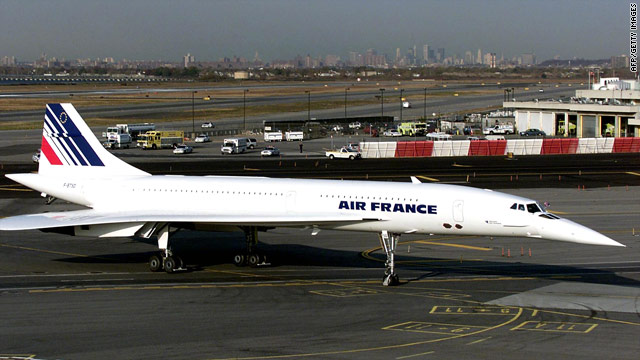 In its day, the supersonic commercial airliner Concorde flew from London to New York as British Airways Flight 1.
May 18th, 2011
09:28 PM ET

Most airlines assign flight numbers randomly, but every so often, a bit of whimsy makes its way into the schedule.

Southwest Airlines Flight 711 goes from San Antonio to Las Vegas in a wink to the craps tables, an airline spokeswoman said. Some flights to and from Philadelphia fly under 1776, the year the Declaration of Independence was signed in the City of Brotherly Love. And some flights to Columbus, Ohio, go by 1492, the year Italian explorer Christopher Columbus sailed the ocean blue.

ŌĆ£At Southwest, we try to have fun with everything we do,ŌĆØ the spokeswoman said. ŌĆ£We have a system built in-house that allows us to include or exclude flight numbers as we see fit, but we do assign certain numbers to certain flights for fun.ŌĆØ

The occasional ŌĆ£legacy numberŌĆØ remains, such as American Airlines' Flight 1 from New YorkŌĆÖs JFK airport to LAX, but ŌĆ£most of the stuff is pretty random,ŌĆØ he said.

ŌĆ£They used to have more fun with these things in the past,ŌĆØ Snyder said. ŌĆ£They try to keep with legacy systems when they can, but the airline mergers have thrown them into disarray. Every airline used to have a flight 1, but when you have a merger, which one do you keep?ŌĆØ

United Airlines pulled the merger card Wednesday when flight numbers 93 and 175 resurfaced briefly, despite having been retired after the September 11, 2001, attacks on New York and Washington.

"It should not have happened, and we should have caught the mistake sooner than we did," Johnson said. The numbers will remain off the books, he said.

Like United, many airlines have a list of flight numbers they donŌĆÖt use, usually because of their association with disasters, Snyder said.

Southwest probably has the most latitude, he said, because it doesnŌĆÖt code share its flights with other airlines.

Even so, he said, the art of numbering flights appears to be going the way of the Concorde (which, by the way, was British Airways Flight 1, from London's Heathrow airport to JFK).

ŌĆ£It adds a nice little human touch when you get some of those flight numbers. Certain frequent fliers get nostalgic if they fly a lot on the same flight number. ThereŌĆÖs something about it people tend to identify with,ŌĆØ he said.