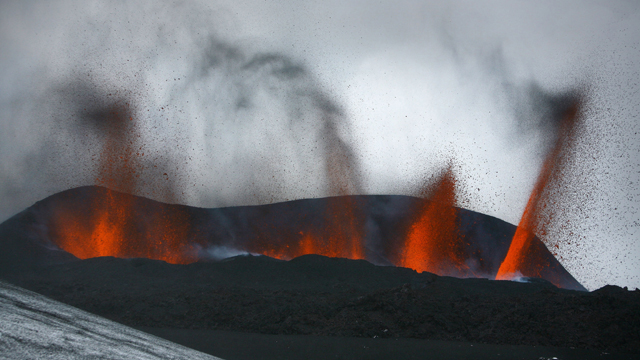 In today's Gotta Watch, we're looking at the awesome power of some of the planet's most active volcanoes. From the easy-to-pronounce Mount St. Helens to another whose name you best not try to utter unless you're sitting down.

Mount St. Helens – On May 18, 1980, Mount St. Helens erupted, becoming the most destructive volcano in United States history. An earthquake and subsequent landslide triggered a series of eruptions and a massive ash cloud. The blast was reportedly so powerful it was felt as far away as Canada. The eruption claimed the lives of 57 people and injured many more.

Eyjafjallajokull – Often refered to simply as "the Icelandic volcano" due to its tongue twister of a name, Eyjafjallajokull wreaked havoc for international travelers for the better part of a week back in 2010. At its peak, the crisis affected 1.2 million passengers a day and 29 percent of all global aviation, according to the International Air Transport Association, becoming the worst disruption of air traffic since the September 11 terrorist attacks back in 2001.

Merapi – The Merapi volcano's most recent eruption began on October 26, 2010. It killed hundreds of people and displaced more than 200,000. The Indonesian volcano's recent eruptions released about 140 million cubic meters of magma, the National Agency for Disaster Management said.

Mount Vesuvius – Just short of 2,000 years ago, the city of Pompeii was wiped off the map by a historic eruption that buried an entire city in ash. Pompeii is now a major tourist attraction and is considered one of Italy's most important archaeological sites.