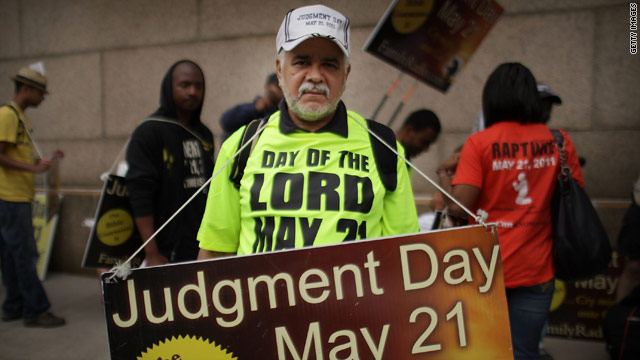 Overheard on CNN.com: Scoff and concern for end-of-the-worlders

"It's the end of the world as we know it and I feel fine." – Lolita

The beginning of the end of the world, in some people's minds, is near - like this Saturday. According to loyal listeners of Family Radio, founded by Harold Camping and based in Oakland, California, Saturday will usher in the beginning of Judgment Day. They believe a massive worldwide earthquake will strike, leading to five months of death and destruction culminating on October 21, when the Earth will no longer exist.

Some CNN.com readers expressed strong skepticism about the "end of days" prediction, and some felt empathy for the people who have given up their possessions, jobs and family to spread the message.

Acts 2:38 said, "The rapture will NOT take place on May 21st. I feel so bad for the poor people who have bought into Mr. Campings lies." Claymation said, "This Camping fellow knows exactly what he's doing. He's done it all before. The fact is that he's feeding off these people, whether it be for money or fame, he's getting what he wants. May 21st will come and go and he'll say something like, 'Oops, I guess I miss calculated' and change the date." Walt said, "I hope Mr. Campings gets sued by all these people that have been following him. What are these poor people going to do on Monday when they realize they have no jobs, no belongings and probably no money?" Martha said, "I really, really feel sorry for the children of these people who have to spend these next few days terrified of the world ending Saturday evening, and the supposed mechanics of that, and then the issue of how will they will adjust to their reality for years to come."

Other readers found the idea amusing and responded in kind:

Donnie said, "Wow. This is actually good news for me. I've got a bunch of drywall and painting work to finish at the house this weekend, so this will really take a lot off my plate. Thanks God for freeing up my weekends ... FOR ETERNITY!" J said, "If we're supposed to be 'sorted' on the 21st, I hope I’m on Gryffindor!" NB said, "Thank God I'm playing golf on Friday. Maybe I can go out with a round of glory!" D said, "Darn. My End of the World Party doesn't start until 6:30 on Saturday." Jason Goodrich said, "End of The World Parties are always the best. Usually it's on a hurricane day. I hope the weather is good Saturday night." JohnnerMan said, "I'm glad that God acknowledges our (man-made) International Date Line. I wonder if heaven observes daylight savings time?" curleyg said, "I need to know what time Sat. Do I bet the Preakness or not?" Outawork said, "Oh boy!!! Now I don't have to worry about finding a job, but with my luck I'll win the lottery this Saturday." The Jackdaw said, "If this turns out to be true and I don't go to Heaven, I will earn my place in Hell before October." PCollen said, "Have a good flight. BTW, can all you soon to be departers leave me your bank account ID and passwords?" KMAN said, "People! You've got it all wrong! Everybody knows that the world won't end until that fateful day when the Chicago Cubs are one out away from winning the World Series."

Some Christian CNN.com readers who didn't subscribe to the prediction defended their religion:

gmn835 said, "Matthew 24:36 No one knows about that day or hour, not even the angels in heaven, nor the Son, but only the Father. (NIV)" Iago said, "If we Christians everywhere would stop trying to figure out God's plan and concentrate more on being the hands and feet of Jesus by reaching those who are lost, you'll touch more people as opposed to sending out RVs with 'Repent Now ... ' pamphlets and billboards." While Isaac quoted Robert G. Ingersoll –"The inspiration of the bible depends on the ignorance of the person who reads it" - Bob said, "Don't lump all Christian's together. 99% don't think this way." LindaMae said, "No one can be sure when the world will end - we just have to be ready always - start by forgiving yourself and then others. Be at peace with yourself so you won't have to worry when the time comes."

President Obama has imposed sanctions against six senior Syrian officials and two Iranian Quds Force commanders in an effort to stop the regime's fierce crackdown on protesters. The effort comes after more than two months of unrest in Syria and reports of hundreds of deaths and thousands of arrests.

CNN.com readers had mixed reactions to the president's action:

Neutronium said, "Sanctions. Let the escalation begin." sammoor said, "Great work President Obama. This regime deserves a shakeup." randypeel said, "Assad Jr. of Syria is worse than Gadhafi of Libya , Mubarak of Egypt , and Ben Ali of Tunisia." Tsimbi7 said, "Sanctions. Never HAVE worked. Never will." RealHist4Me said, "Where are the sanctions for Yemen and Bahrain?" sam9999999 said, "Oh no, sanctions! Not sanctions! Somehow, some way, this will cost us billions."

Goss68 said, "Why aren't we bombing targets in Syria and trying to take out Assad? The situation is much worse than it was in Libya. Assad's regime has killed more than 2000 people since the pro freedom activities started five weeks ago in Syria. That's more casualties than all the other pro-freedom events in Tunisia, Egypt and Lybia combined. Thirty years ago, his father killed over 40 thousand innocent children, women and elderly in the town of Hamma. Jr. will do the same, or worse if not constrained. President Obama, it is time for you to tell Assad to leave power."

justaword said, "Sanctions against another country? Give me a break. It would be nice if Obama focused on real problems facing the US. How about sanctions against our own Congress to get back to work and stop playing politics with our future otherwise the street riots similar to the Middle East are going to begin here in America."

Kevin442 said, "I say that sanctions, done right, are a good, nonviolent way to put pressure on the leaders of Syria. However, I caution that we keep an eye on how it will affect the price of food in Syria. At times, people might bite the hand that feeds them. But they will for a fact rip out the throats of those who starve them. We do not want to be that person."

Thanks, in part, to the popularity of Netflix, perhaps for the first time in the Internet's history, the largest percentage of its traffic is content that is paid for. Netflix streaming movies now fill more of the U.S.'s Internet tubes than any other service, and streaming real-time entertainment is also on the rise.

Many CNN.com readers posted comments about how Netflix has changed the way they view at-home entertainment.

cobaltblue said, "See what happens when you charge a reasonable price for services? I love my Netflix streaming. Netflix has always been an excellent service and the very few service issues I've experienced have been remedied right away." NSIndiana said, "Netflix unlimited streaming movies/ TV shows = $10/month + Unlimited high speed internet through ATT = $20/month for a total of $30/month. Cable and internet through most providers = $120+ a month. Now I wonder why this is shocking." ExtremePhobi said, "I think the takeaway here is that if you make it affordable, people won't pirate."

toofly said, "I'd be distraught without my Netflix. I like TV shows but there’s nothing worse than watching 20 minutes of commercials in a 60 minute episode just to be left with a cliffhanger you need to wait a week for to see the end. With Netflix you can get rid of all of that." But PCTech714 responded, "I can't believe that in this day and age no one has heard of a DVR. If I want to skip commercials, I push the skip button on my remote and it fast forwards 30 seconds at a time. Usually after a few presses I'm back to the program. As far as cliffhangers go: that's the whole point. Sometimes the "NOW NOW NOW" mentality of this world disturbs me ... "