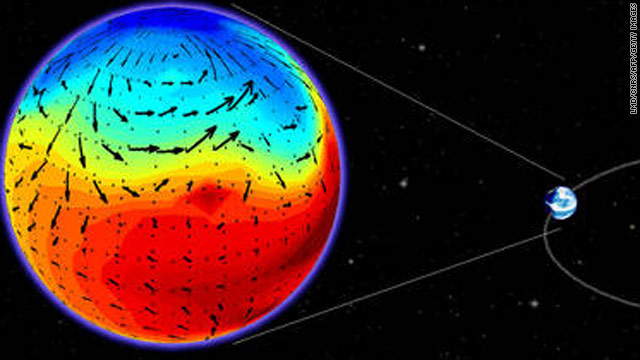 A graphic shows surface temperature variations on Gliese 581d and how wind patterns would moderate the climate.
May 18th, 2011
10:57 AM ET

Astronomers in France say a rocky planet orbiting a star that's one of our closest galactic neighbors may have all the ingredients to make us earthlings feel right at home.

The planet Gliese 581d, orbiting the red dwarf star Gliese 581 about 20 light years from Earth, could support oceans, clouds and rainfall with a greenhouse effect that would moderate its temperatures, the team of scientists from the Institut Pierre Simon Laplace in Paris says in a study published this month in The Astrophysical Journal Letters.

If you're thinking¬Ý the Gliese 581 system and possibly habitable planets sound familiar, you're right. Just last year, scientists reported that another planet, Gliese 581g, was a prime candidate to support life.

More recent studies have cast doubt on whether Gliese 581g even exists, although one of the scientists who claimed its discovery, astronomer Steven Vogt of the University of California-Santa Cruz, has defended his work, according to a report on Space.com.

With the 581g debate in mind, the scientists in Paris decided to take another look at 581d, which they note is seven times the size of Earth. When it was discovered in 2007, 581d was thought not to be capable of sustaining life, because it has permanent day and night sides, with the night side too cold for living organisms, and it gets only a third as much energy from its star¬Ýas Earth gets from the sun.

The Paris scientists used a new atmospheric simulation model to look at 581d. And here's what they found, according to a press release:

"With a dense carbon dioxide atmosphere - a likely scenario on such a large planet - the climate of Gliese 581d is not only stable against collapse, but warm enough to have oceans, clouds and rainfall."

The fact that 581d orbits a red dwarf star makes a big difference, they found.

On Earth, a phenomenon called Rayleigh scattering reflects heat from our sun in the form of blue light back into space. This helps keep Earth from overheating. But as the atmosphere on 581d is absorbing only red light, Rayleigh scattering doesn't come into play.

"This means that (light) can penetrate much deeper into the atmosphere, where it heats the planet effectively due to the greenhouse effect of the CO2 atmosphere," the scientists said in the press release.

Their model also showed "the daylight heating was efficiently redistributed across the planet by the atmosphere, preventing atmospheric collapse on the night side or at the poles," they said.

But don't pack up the spaceship just yet.

"While Gliese 581d may be habitable there are other possibilities; it could have kept some atmospheric hydrogen, like Uranus and Neptune, or the fierce wind from its star during its infancy could even have torn its atmosphere away entirely," the scientists said.

And even if you left now, in a current-technology spaceship, it would take 300,000 years to get to the Gliese system.

So there's plenty of time to figure it out. Or get Capt. James T. Kirk and the starship Enterprise to explore strange new worlds.

JUST IN: The US Food and Drug Administration has OK'd a booster dose of Pfizer's Covid-19 vaccine for certain adult‚Ätwitter.com/i/web/status/1‚Ä¶fI
cnni

7:47 pm ET September 22, 2021 RETWEET
A group of bipartisan US lawmakers is dedicated to getting a new memorial to honor military veterans of the global‚Ätwitter.com/i/web/status/1‚Ä¶fw
cnni

7:35 pm ET September 22, 2021 RETWEET
James Mattis, the former US Secretary of Defense and onetime Theranos board member, recounted how he lost confidenc‚Ätwitter.com/i/web/status/1‚Ä¶Xq
cnni