The White House says US District Court Judge J. Michelle Childs is one of the people President Biden is consideringŌĆtwitter.com/i/web/status/1ŌĆ”V8

RT @CNN: Justice Stephen Breyer has written a letter to President Biden informing him of his intent to retire from the Supreme Court https:ŌĆ” 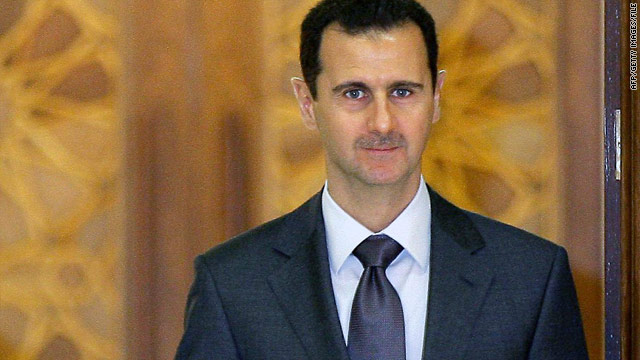 The sanctions also target two top Iranian officials whose unit was a "conduit for Iranian material support" to Syrian intelligence, according to a copy of the executive order issued by the White House.

Obama signed the order Wednesday, a move a senior administration official described as a "decisive step to increase pressure" on the Syrian government to end violence, intimidation and pressure "and begin transitioning to a democratic" process.

Condemning Syria's use of violence and intimidation against its people, the official said al-Assad "must put an end to the attacks on protesters, mass arrests and harassment" of citizens expressing rights and "must begin to introduce change."

The Syrian government has launched a clampdown on peaceful demonstrators since mid-March. The United Nations last week said as many as 850 people have died in the protests, and there have been thousands of arrests.

"As a result of this action, any property in the United States or in the possession or control of U.S. persons in which the individuals listed in the Annex have an interest is blocked, and U.S. persons are generally prohibited from engaging in transactions with them," the Treasury Department said in a statement detailing the steps.

The senior administration official said it's too early to estimate how much will be frozen.

Treasury also announced the designation of 10 individuals and entities under an executive order signed by Obama on April 29.

It targets Syrian officials and others "responsible for human rights abuses, including repression against the Syrian people, as well as a set of companies tied to Syrian corruption."

One is Hafiz Makhluf, a cousin of al-Assad and a senior official in the Syrian General Intelligence Directorate, the overarching civilian intelligence service in Syria.

"Makhluf was given a leading role in responding to protests in Syria, and was heavily involved in the Syrian regime's actions" in the city of Daraa, the official said, where many protesters have been killed.

Also designated were two Iranians: Qasem Soleimani, commander of the Iranian Islamic Revolutionary Guard Corps-Quds Force, which is called "the conduit for Iranian material support" to the Syrian General Intelligence Directorate, and the other is Mohsen Chizari, a senior IRGC-QF officer who serves as its commander of operations and training.

"It is a completely hypocritical act" of the Iranian government and the Quds force to "lend assistance in oppression" against those expressing human rights, the senior official said. "It is something we are concerned about," the official added.

Other agencies designated are the Syrian Military Intelligence, the Syrian National Security Bureau, which is an element of the ruling Baath party; and Syrian Air Force Intelligence.

All are said to be involved in the actions against demonstrators.

- CNN's Elise Labott and Adam Levine contributed to this report

For the first time in its 85-year history, NASA's Jet Propulsion Laboratory has a female director. Geochemist andŌĆtwitter.com/i/web/status/1ŌĆ”a2
cnni

1:01 am ET January 29, 2022 RETWEET
A woman says a TikTok video that was labeled as showing Gastonia, North Carolina, tricked her into driving to the cŌĆtwitter.com/i/web/status/1ŌĆ”S7
cnni

12:31 am ET January 29, 2022 RETWEET
After a six-month undercover investigation, authorities in Florida have charged 68 people in connection with the saŌĆtwitter.com/i/web/status/1ŌĆ”Z5
cnni