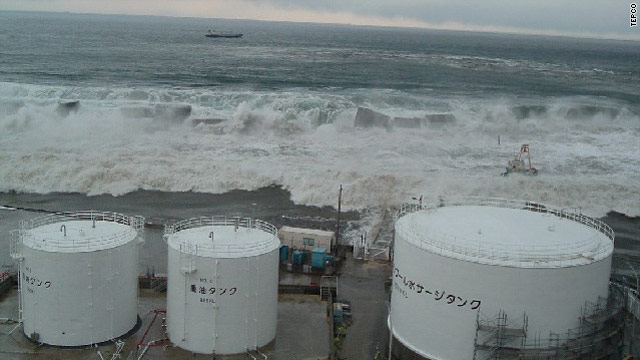 Comparisons to Chernobyl slammed as images of Japan tsunami emerge

The Tokyo Electric Power Co. has released dramatic tsunami images on its website, as a nuclear expert slammed comparisons between the Japan nuclear disaster and Chernobyl.

The photos, which are available on TEPCO's website, show the tsunami that crippled the Fukushima-Daiichi nuclear plant barreling toward the facility before inundating it with water.

The news came as the power company continued to issue press releases reporting radiation in the groundwater and seawater around the plant. It also came two days after the company said it learned that a pressure vessel in reactor No. 1 may be leaking and that the reactor's fuel rods almost melted completely hours after the tsunami hit.

A U.S. physicist said, if accurate, the revelations would indicate a "very, very bad accident" that would be difficult to clean up.

Reactor No. 2 may also be leaking, TEPCO said, and it warned that reactor No. 3 faces the same risk.

TEPCO announced revised plans to cool the reactors this week but said the changes would not affect the current deadline to end the worst nuclear disaster since Chernobyl by the beginning of next year.

The tsunami sweeps up cars outside the Fukushima-Daiichi plant.

Meanwhile, comparisons between Japan's nuclear disaster and the 1986 catastrophe in Ukraine came under fire Wednesday when Robert Wakeford of the University of Manchester's Dalton Nuclear Institute called the likenesses overblown.

The International Nuclear and Radiological Event Scale, Wakeford wrote in the June issue of the Journal of Radiological Protection, is designed to let people know the severity of a nuclear event. It characterizes both Chernobyl and Fukushima as Level 7, or major, accidents, even though Fukushima had released only 10% of the radioactivity leaked at the Chernobyl plant when the INES designation was made.

‚ÄúSince Level 7 is the highest rating on INES, there can be no distinction between the Fukushima and Chernobyl accidents, leading many to proclaim the Fukushima accident as ‚Äòanother Chernobyl‚Äô, which it is not," Wakeford wrote.

Also on Wednesday, TEPCO released a silent video walking tour of the damaged plant, much of it showing what we already knew: that the March earthquake and ensuing tsunami destroyed significant portions of the facility.

The 13 minutes of footage, which are among myriad videos the company has released as the disaster unfolded, show workers in radiation suits walking amid gutted buildings. Some of the buildings¬Ýhave massive holes punched through their walls, exposed rebar and smashed windows.

Earlier this week, the International Atomic Energy Agency announced it would send about 20 international experts to Japan between May 24 and June 2 to conduct a fact-finding mission.

The agency's head, Yukiya Amano, told Reuters on Thursday that despite signs of progress -¬Ýincluding the restoration of electricity and instrumentation - the situation at Fukushima remains a "very serious accident."